Unfortunately, Roswell, NM wasn't as cool as I'd envisioned it. I was hoping the streets would be lined with little green men, there's be all sorts of UFO-themed attractions and stores and restaurants where you could get a "flying saucer burger" and an "alien ale". Alas, it was nothing like that. We did however have fun for a couple of hours downtown in the "alien zone" and the girls enjoyed their day excursion to Carlsbad Caverns.

The drive from Ft. Sill was a little longer that we expected. Google Maps said it was a little over 6 hours but in reality it took roughly 8 eight hour, including a stop in Lubbock, TX for dinner at BJ's Brewhouse. We finally pulled into the RV spot around 10:30pm MST and got settled into our spot with a little help form our neighbor. We'd driven around the park so many times that she felt compelled to come out and help us.

After school and work on the first day we ventured into Roswell to run some errands, look around and get a bite to eat. Not an impressive city and we only found one restaurant that we thought was cool. After dinner we drove around for awhile and scouted out the local Alien spots for the next day. We went home, got the girls in bed and Cathy watched a new episode of Walking Dead. I hit the sack early due to the time change.

Tuesday didn't start out well. Apparently there was a farm or something nearby with roughly 1.27 million cows as their odor was quite strong. We'd smell them on and off throughout our stay in Roswell and the girls were not happy going outside when the wind was blowing the wrong way. Also, Hali's new HP Chromebook's keyboard stopped working. I looked it up online and found out it was a common problem so we quickly ordered a different brand and sent the HP back. Gotta love Amazon's next day delivery for $6!

After school and work we headed out to do the UFO Museum downtown. Kira and Lexi were a little freaked out at first but soon were able to walk around the facility without being strapped to my legs. I was hoping it would be more interactive for the girls but the majority of the exhibits were news clipping and reports. They did have some alien statues and replicas that the girls liked. Afterwards we wandered down the block to two more little stores to do the alien-tourist-crap. It was pretty fun and we got a lot of good photos. The girls, especially Kira, still talk about the UFO museum and bugged me to death until I put all of the photos on her computer.

Wednesday was my favorite day in Roswell. Everyone left and headed an hour south to Carlsbad Caverns without me. Boy was it quiet! I got so much accomplished that day. Apparently the caves were much different than Mammoth Cave as they had a much more open feel to them. They took the 2 hour self-guided tour and had a blast. The drive home consisted of singing songs, playing the "Disney character" game, practicing Spanish and singing "All about the Bass" over and over and over again.

Insanity returned when the girls arrived home around 5pm. We had dinner, Hali and I started our Keith Urban guitar lesson CDs and Cathy scouted spots for our next destination.

The next morning Cathy made a quick run to Walgreens while the girls took showers. Then we pack up and headed 3.5 hour SW to Las Cruces, NM for a couple of days. 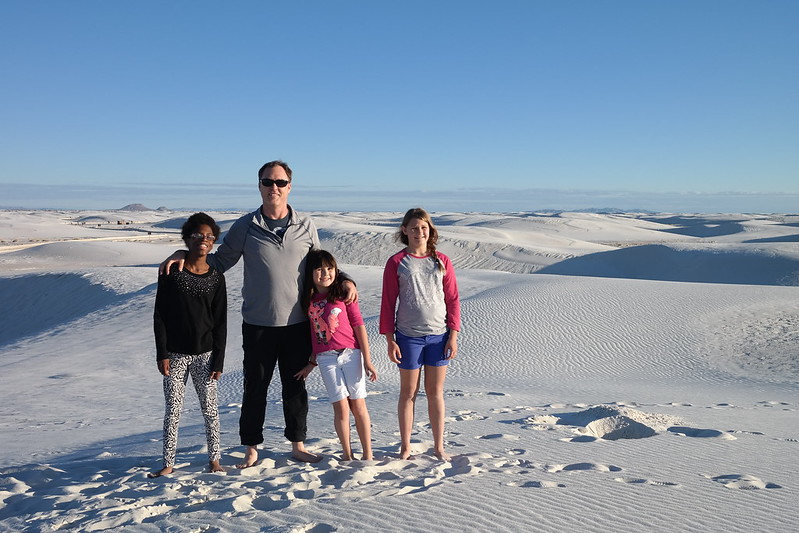 We were rather anxious to leave Roswell as four days was more than enough time for us. We didn't know what to expect from our next stop, Las Cruces, but

Our two week stay in Ft. Sill was simply to see our daughter Brittany, stationed there in the Army. We didn't plan on doing anything "exciting" during our