Tucson was our short stop to "play in the desert". It was only three-ish days but we spent most of the time in nature with dirt, rocks and cacti. Everyone really loved Arizona and enjoyed the desert. I suspect we'll be back again.

Monday's journey from Las Cruces, NM was not as fun as we'd hoped. We thought we'd stop at a National Park and see some of the pueblos but our GPS gave us a strange location for the National Park. So we decided not to drive the 1.5 hours out of our way and just stop for lunch instead. It was dark when we arrived in Tucson and we had an interesting time getting into our RV spot. The park was nice but the spots were tight. I ended up moving a couple of "boulders" so Cathy could park her RV. We met our neighbor Doug, a snowbird from Michigan, who helped us out and gave us some good advice. 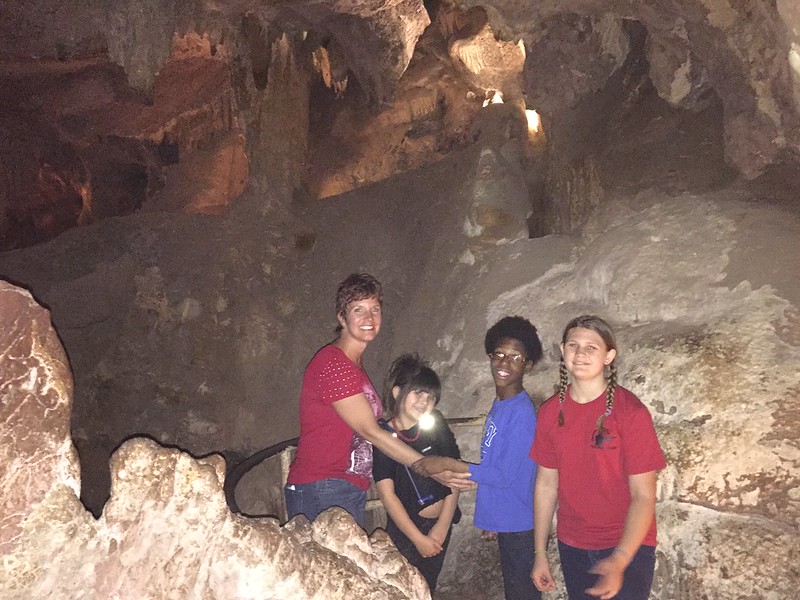 After school and work Tuesday we took off for Colossal Cave just outside of town. Cathy love caves but I'm somewhat over them. It was a private, somewhat smaller cave system but everyone had a good time. The guide was a younger guy and the tour seemed a little scripted like he was ready to go home. I think we were the last group for the day. 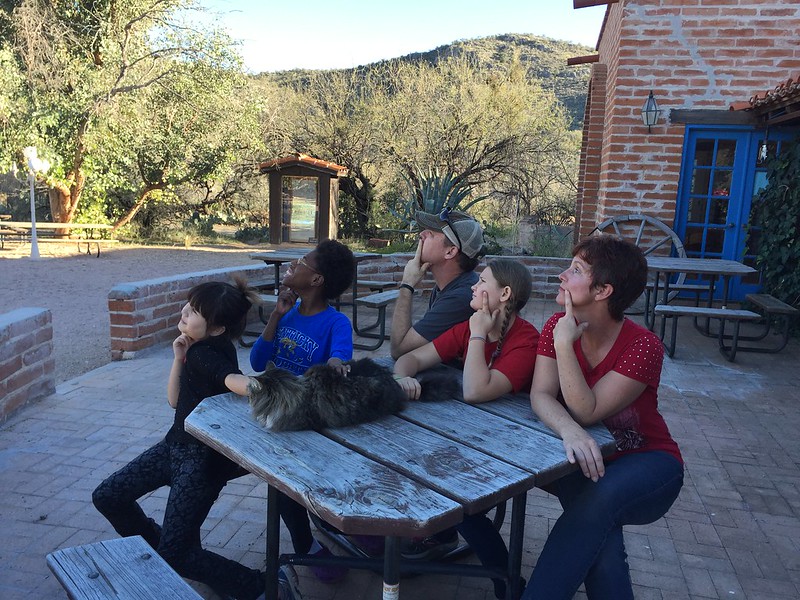 Afterwards we wandered around their little ranch and talked with the Asian lady working there. She was super nice! The girls played with the cats (the highlight of the trip) and the lady took a ton of pictures of us. Dinner was at the Barrio Brewing Company and it was awesome!! It was an old warehouse that had been converted into a brewery and restaurant. We had a great time playing pigs, eating fried food (no french fries!!) and drinking craft beer. Gotta say, we were all pretty happy.

Wednesday started off with Lexi getting into trouble and losing her computer. Not a good day. However, Cathy made things a little better by bringing home a bunch of books from Goodwill plus some ski clothes for our ski adventure next week.

Cathy had confirmed with Doug, our neighbor, that Sabino Canyon was the place to go. So we loaded up the Jeep and took the short drive to their visitor center after everyone was done with school and work. 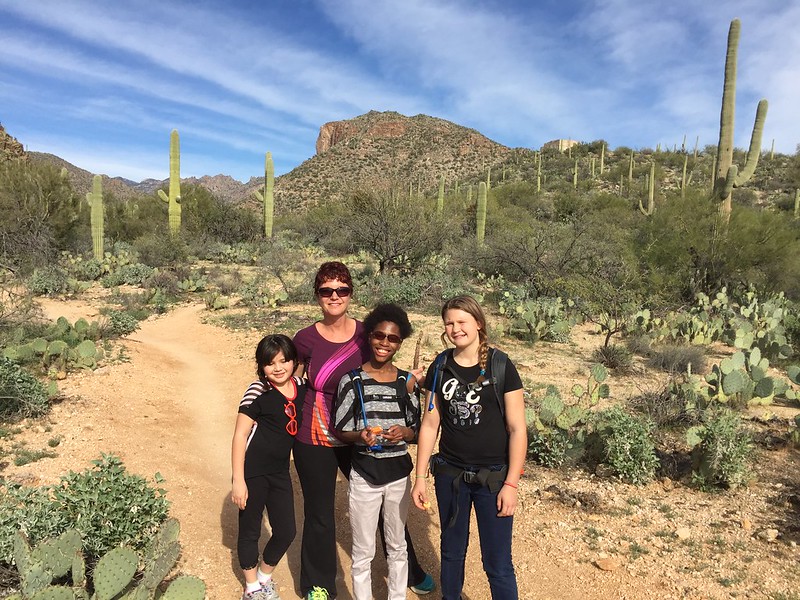 The have tram rides to the top of the mountain but we decided to take a short hike before catching the next one. The day was beautiful and the weather couldn't have been nicer. However, after an hour and a half hike the girls were ready to call it quits. We even played hide and seek for awhile in the desert but they were done. The photos below are quite funny. 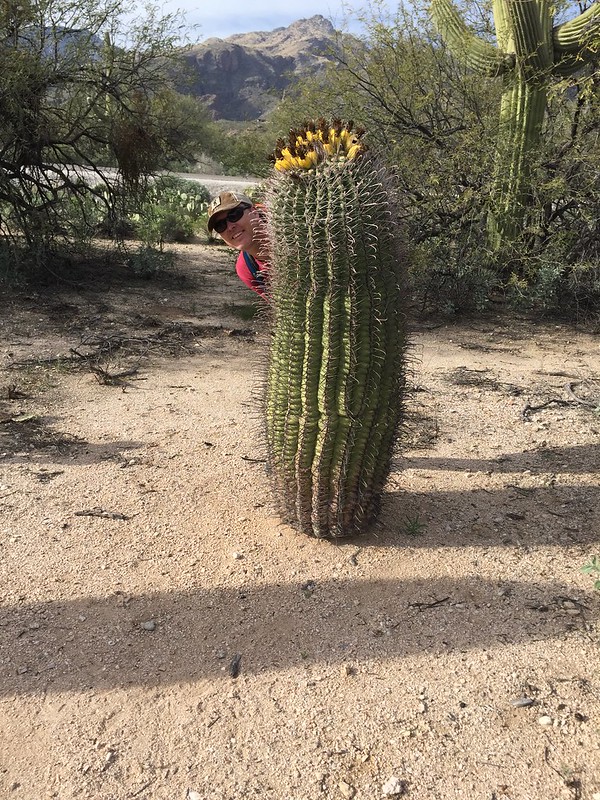 We caught the last tram to the top and it was such a fantastic trip. The view was amazing. Arizona is so beautiful and different from Florida (duh). There are some great photos below. We left shortly after they closed and headed back to Barrio Brewing Company for dinner again.

Thursday we left Tuscon and headed just north of Phoenix for our first try at "dry camping". Cathy had found Harvest Hosts online and really wanted to give it a try. It's essentially a series of farms, vineyards and "places" that let you stay onsite for free (no electricity, water or sewer) in exchange for "supporting" them financially somehow. We stayed in the Canyon Cafe in an empty lot next to the restaurant and had dinner there. Not a bad deal and we'll probably try it again if we find a cool farm or vineyard. 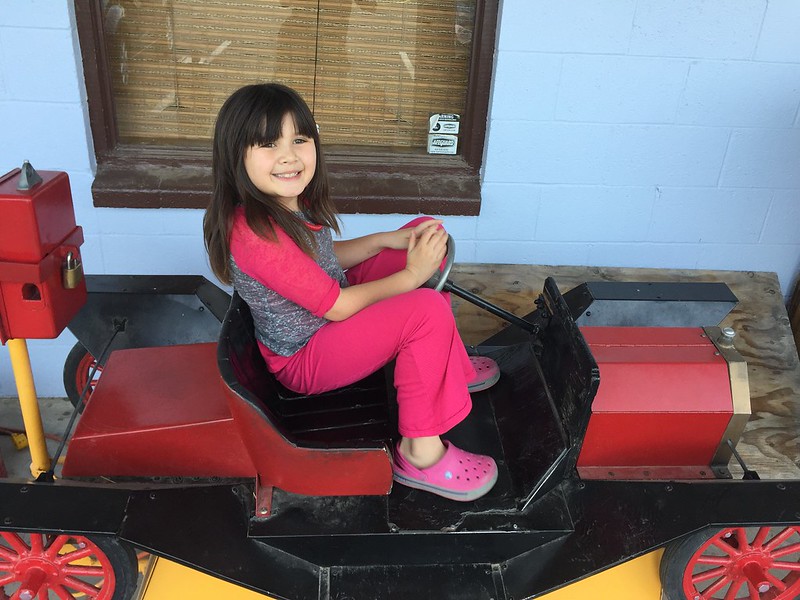 Friday morning we got up, turned off the generator, disengaged the parking break and headed to Sedona.