Portland is my kind of town! Luckily the weather was beautiful the entire 10 days we were there so Cathy was partial to it as well. The area is nice, the traffic isn't too bad and there's a lot to do for families. It was a great stop for us. Since Portland is "Beer Country" we did a lot of "beer things" like hitting the local breweries for dinner and hanging out with friends at pubs (I have a bunch of Appirians and ex-Appirians there). I loved Portland and can't wait to go back! 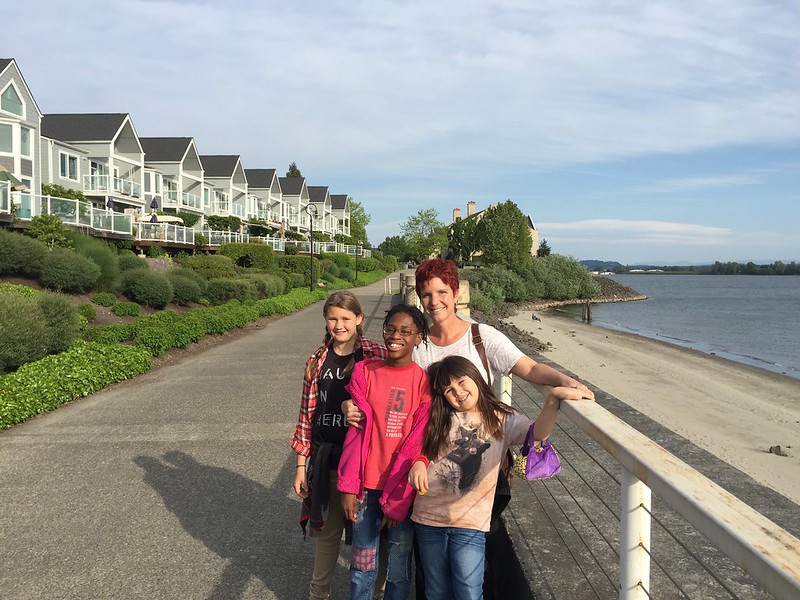 Our two hour drive to the RV park took an extra hour as we hit rush hour traffic on the south side of Portland. The RV park was actually just north over the bidge in Vancouver, WA so it was a looonnnggg journey. Our spot couldn't have been easier to get into and after quickly setting up we headed to McMenamins on the Columbia which is a local brewery with awesome outside patio dining. We walked up and down the river until our table was ready and then had a great dinner before heading home for bed. 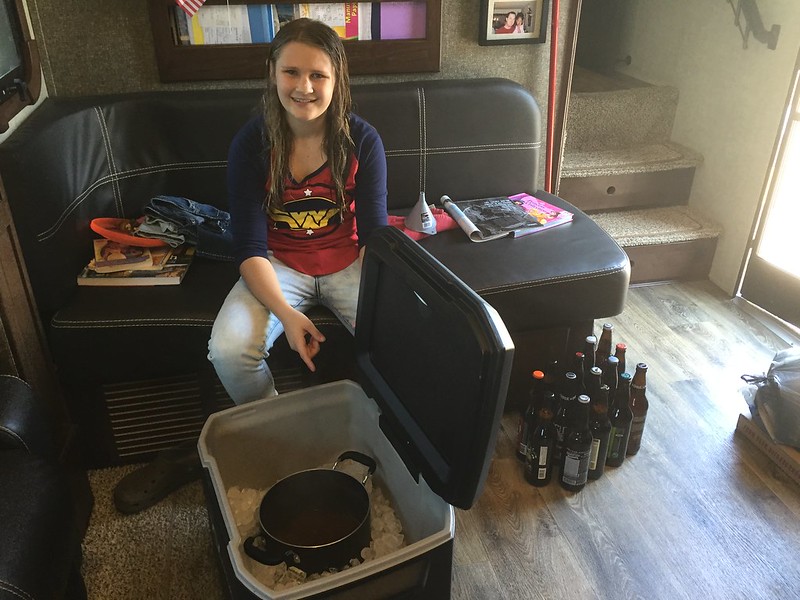 Saturday was the day that Hali and I had been anticipating for a week or two! We were going to brew our beer! I had ordered an IPA beer kit from the Appirio company store and we had finally found some pots big enough to actually make beer in the RV. Our first batch would be called "Jali RV IPA" ... or "Jeff and Hali IPA" or .. if Hali drinks this beer "I'll go to Jail-y IPA". We spent almost the entire morning (3 hours?) brewing beer and learning some science along the way. We made a hot mess of the kitchen (water and beer and stuff all over the floor and stove) so Cathy quietly excused herself so she would't have to look at the destruction we'd wrought. Hali was my assistant brewmaster and did a great job cooking the wort, watching the pot and adding some hops while I ran out for a funnel and some ice. After it was done cooling we poured it into in the gallon glass jug and stuck it in the closet so the yeast could work it's magic. Hali was so proud of herself and brags to everyone how she knows how to make beer. Best. Morning. Evar! 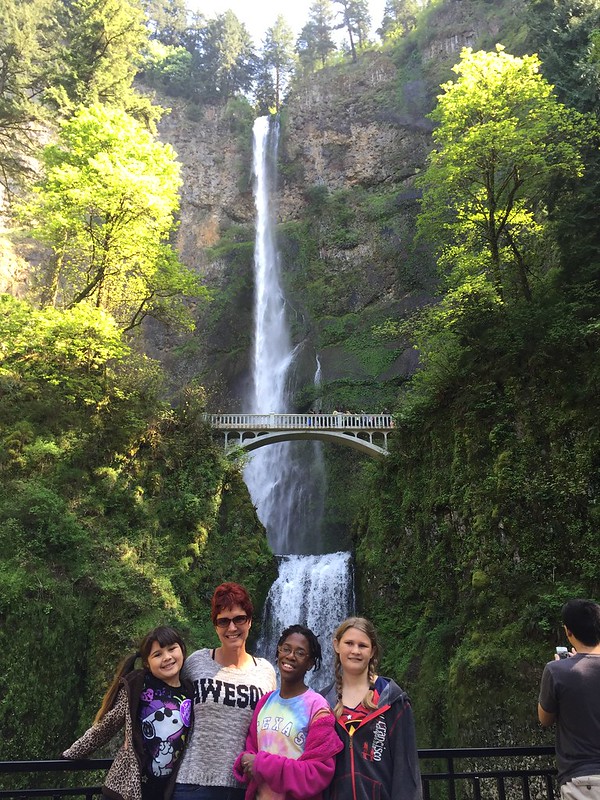 After we cleaned up the house and ourselves, we took off an hour or so east to Multnomah Falls as a number of people had suggested we not miss it. The falls were awesome but crowded. We bathed in their majesty for awhile and then got hot chocolate and snacks before loading back into the truck and heading home to relax and play for the afternoon. 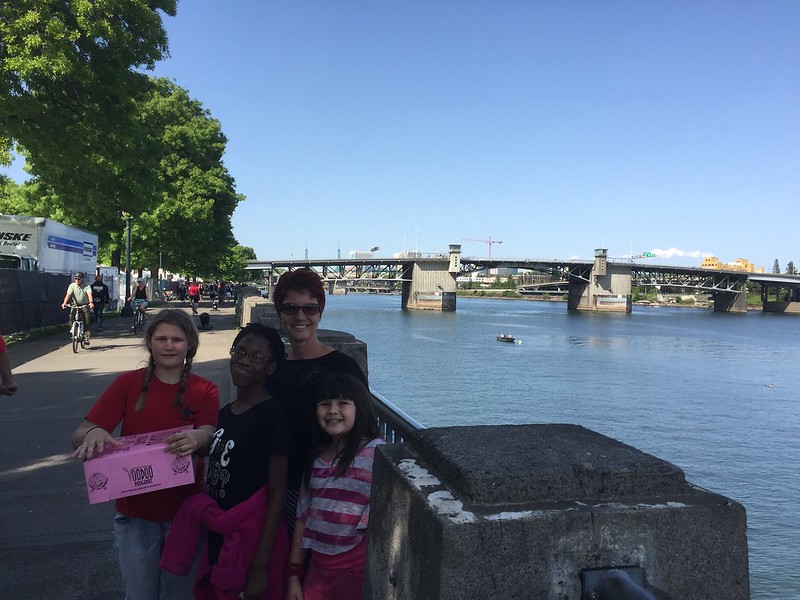 On Sunday we decided to head into Portland to see the city. We got a tip from a buddy to walk down by the river as there was a Cinco de Mayo festival going on plus the weekly arts & crafts fair. The walk was quite lovely but we really had fun browsing the "weird" booths at the arts and crafts fair. I honestly think we stopped at every booth. We then walked a block past the fair and had a snack at the Thirsty Bear; sitting on the sidewalk in the sun just watching people. Afterwards we noticed a huge line around the corner at Voodoo Donuts. We'd never heard of it before but apparently it's big on the Food Network. We waited in line for 20 minutes for our pink box of donuts and then ate till we were sick. Later that night we met our friends Matt and Ruth at Deschutes Brewery Portland Public House and ended up stay roughly 3 hours just chatting away and catching up. 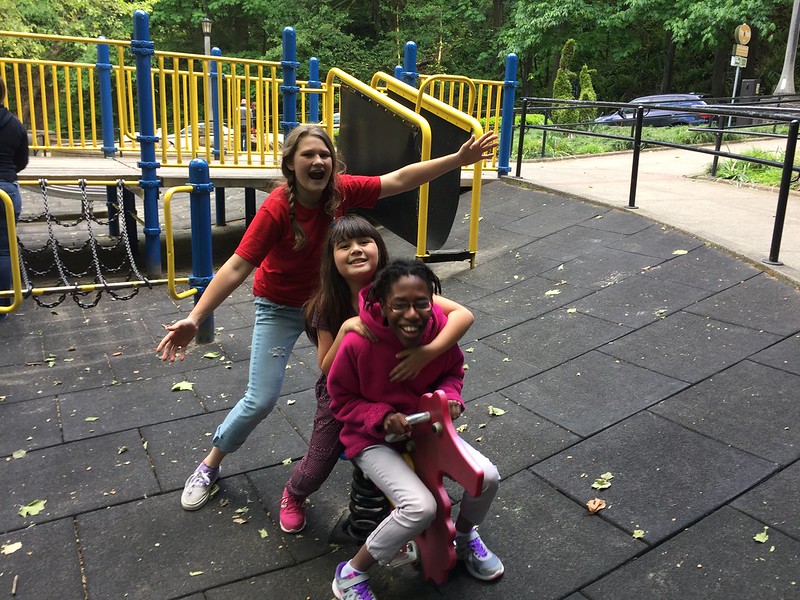 The rest of the week was more or less work and school as usual. We did find Washington Park one night and let the girls play for awhile to burn off some energy. They were super funny and the park was beautiful! Matt had invited me to play card later in the week so I had Cathy drop me off at another brewery (there 52 in Oregon!!) to meet up with Matt, Ruth and some of their friends. I'm not a big card player but it was a lot of fun and I had the opportunity to try some new beer. I marked the night down in the win column. 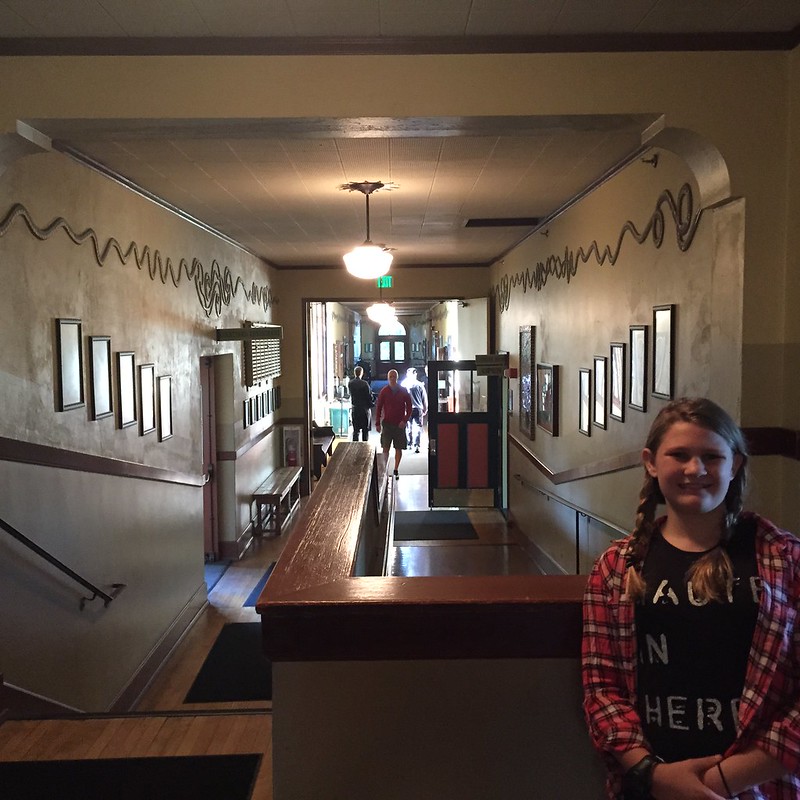 Thursday night we met over at Matt and Ruth's house and then walked down the street to the Kennedy School. Apparently the McMenamins brothers buy old property and turn them into restaurants and such. They'd taken a historic elementary school and turned it into something completely awesome!! We absolutely feel in love with the place and had a blast!

Since its 1915 opening, this historic elementary school has been a beloved fixture of its Northeast Portland neighborhood. McMenamins renovated the once-abandoned scholastic gem and turned it into Portland's most unique hotel. Here you'll find 57 comfy guestrooms with private baths and telephones (some fashioned from former classrooms complete with original chalkboards and cloakrooms – others with an author's theme), a restaurant, multiple small bars, a movie theater, soaking pool, gymnasium for live music, cigar bar (the principal's office) and a brewery. Extensive original artwork and historical photographs cover the walls, ceilings, doorways and hallways.

Afterward we headed back to Matt's and Ruth's house and the girls played with their 2 dogs and 9 cats. Kira's allergies kicked in (obviously) and we had to rush her home and pump her full of benedryl. Her eyes and nose were running like the Columbia river. 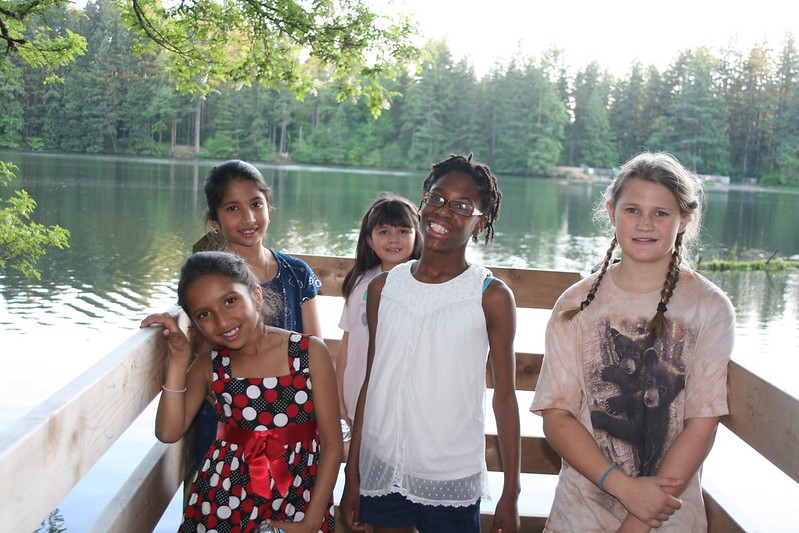 Friday after work the Apparians in Portland put together a small party since I was in town; there were probably about 5 couples that attended. We sat around, talked and snacked before taking a walk down by the lake for some fantastic pictures! Good times seeing old friends and making new ones! 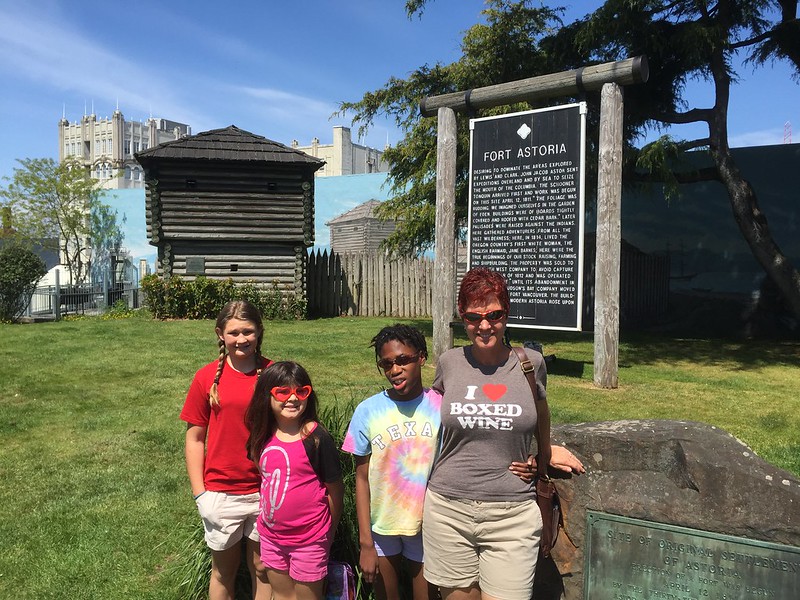 Saturday was a day trip to Astoria! We'd heard great things about the city and were excited to take the 2 hour drive to the coast. The city didn't disappoint. They've done a great job making the city tourist friendly but still keeping the rustic charm. Cathy and I didn't realize that the movies "Goonies" was filmed there so we tried to explain the movies to the girls. I made a mental note to download it in the near future. Every kid should watch Goonies. 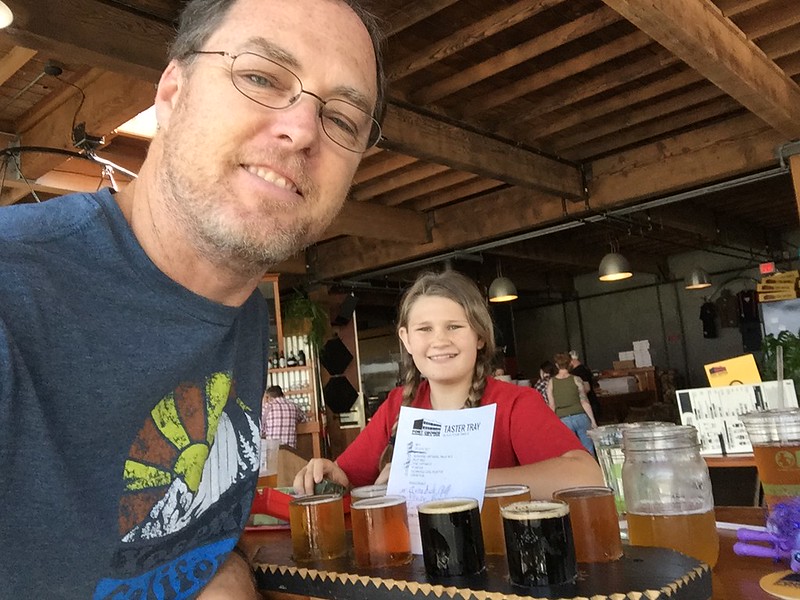 Since it was lunch time our first stop was the Fort George Brewery. It was fantastic!! They have an awesome pizza restaurant upstairs with some great beers. Everyone loved the ambiance, food and beer (ok.. the kids didn't drink any beer). I'd love to go back as it's one of my top 5 favorite breweries so far. Super cool! Afterwards we stopped in a glassblowing shop and watched them for about an hour! Hali and I loved it and we ended up buying a cup and a really cool beer mug. Really nice guys and we ended up learning a lot about the craft. 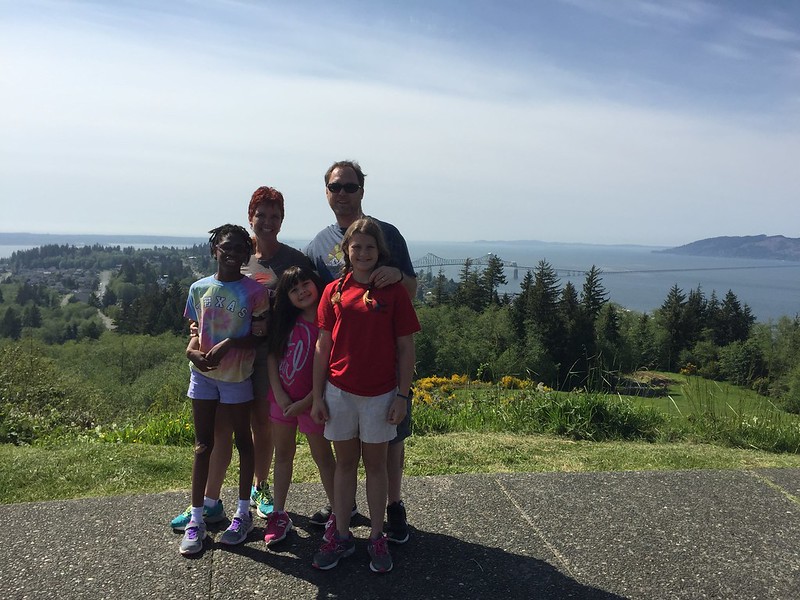 Then we drove to the top of the town and went to Astoria Column to throw paper airplanes. The walk to the top of the tower wasn't bad for Kira and the view of the town, Columbia River and ocean was outstanding!! Apparently the thing to do is buy a paper airplane in the gift shop and see how far you can fly it from the top of the Column. The girls really enjoyed watching everyone throw their planes. Finally we rode the cable car along the water front and then had a disappointing dinner at Bouy Brewery, which everyone had raved about. The best part of the dinner was that they had built the restaurant on the docks and the floors had glass sections so you could look down and watch the sea lions underneath. 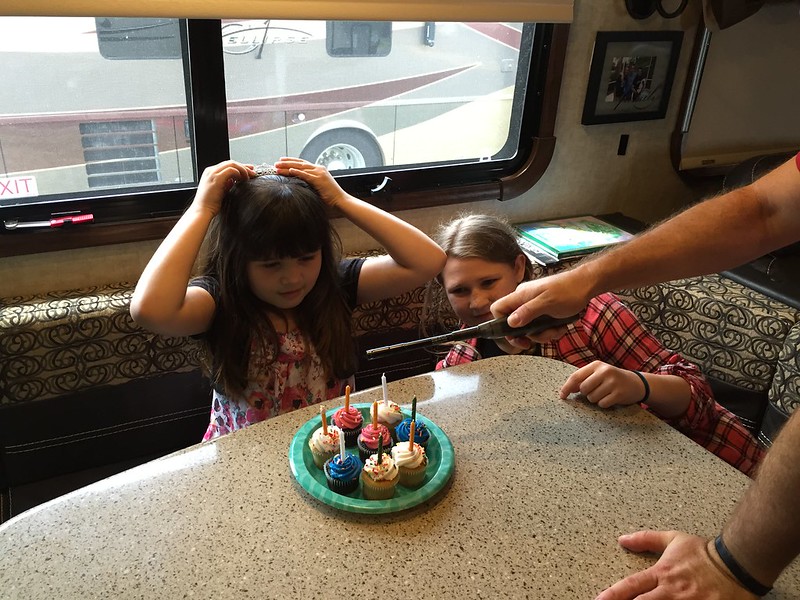 Sunday was Mother's Day and Lexi's Birthday! I got up early and took all of the kids to McDonald's for breakfast while Cathy slept. Later on we walked down the street to Burgerville for lunch (Lexi's choice) and then had cake and opened presents. She got bunch of Wal-Mart gift cards, clothes and a new bike! We'd purchased the bike the night before and hide it outside the RV; she loved it and immeditely took it for a spin around the RV park! Cathy and I weren't feeling well so we skipped our planned trip to Mt. Saint Helens and just stayed home playing and watching Goonies. 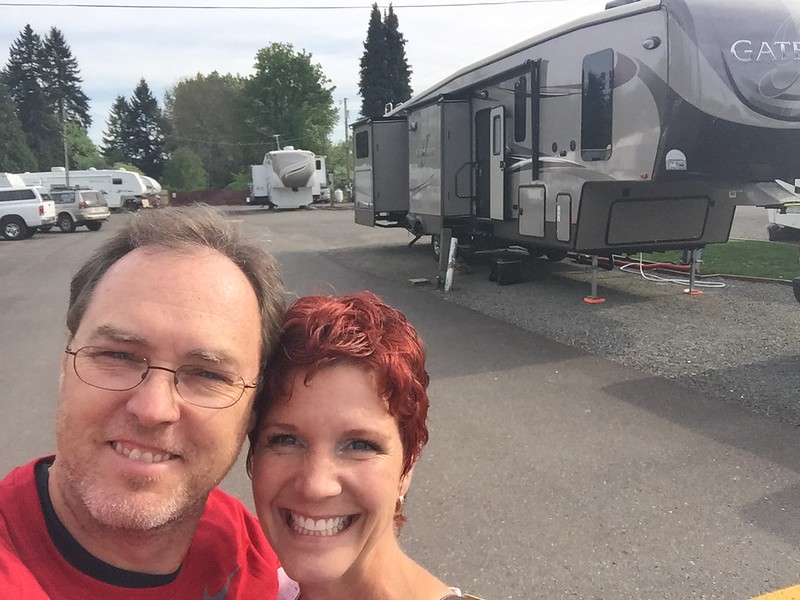 Monday was school and work as usual then we took off for Olympia, two hours north. We were preparing to leave on the ferry for Alaska from north of Seattle and I needed to fly to San Francisco for a couple of days. Everything was taking place new Seattle so it was a hard date we couldn't miss. We would miss Portland.