Everyone absolutely loved Juneau! Inspite of the cruise ship traffic, we had a great time whale watching, ziplining and wandering about town. The city is beautiful, the people are very nice and there's a lot to do. We'd definitely love to go back! 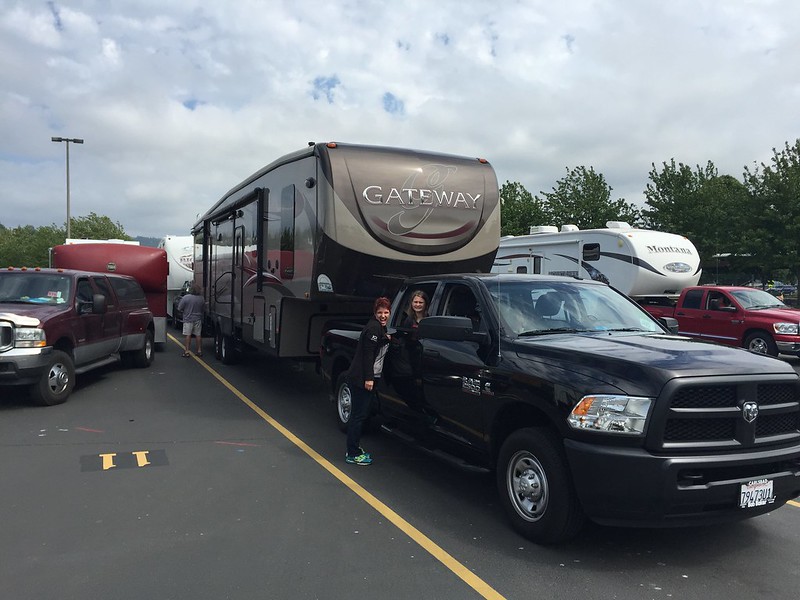 The ferry to Juneau left Bellingham, WA at 7pm so we queued up around 5pm to load. There were probably 50 vehicles (15 RVs?) and we were the last one to board shorly before 7pm. The loading process was extremely easy (these guys are professionals) but it still makes Cathy anxious. She needs a valum or at least 3 shots of tequila for these types of situations. 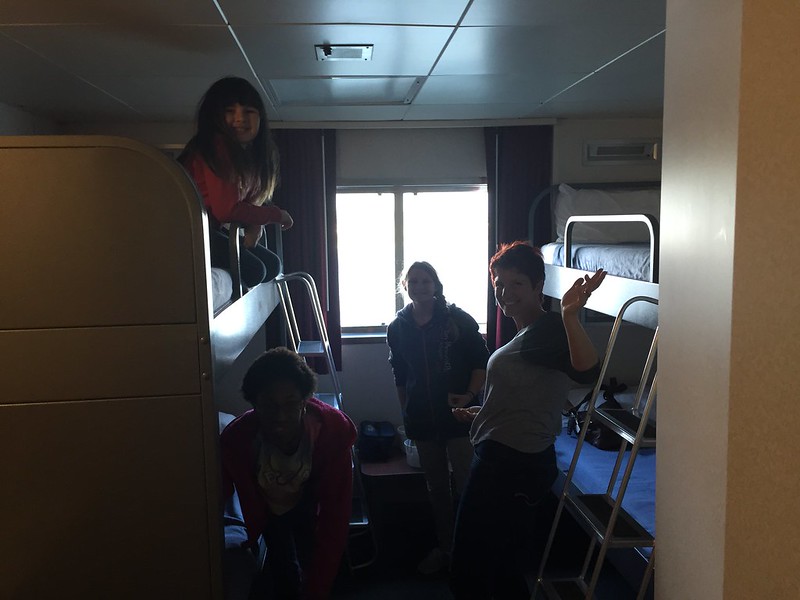 The ferry was nice but definitely no-frills travel. They had a cafe/snack bar with hot food a number of times a day, a dinner restaurant with an over-priced buffet and a movie lounge where they played movies 4 times a day. A couple of times a day they would have "car deck" so we could get back into the RV for stuff. It wasn't a bad way to travel but Kira said she would have rather been on a cruise ship. Cathy and I were quite happy sharing a twin bunkbed. It was cozy!! 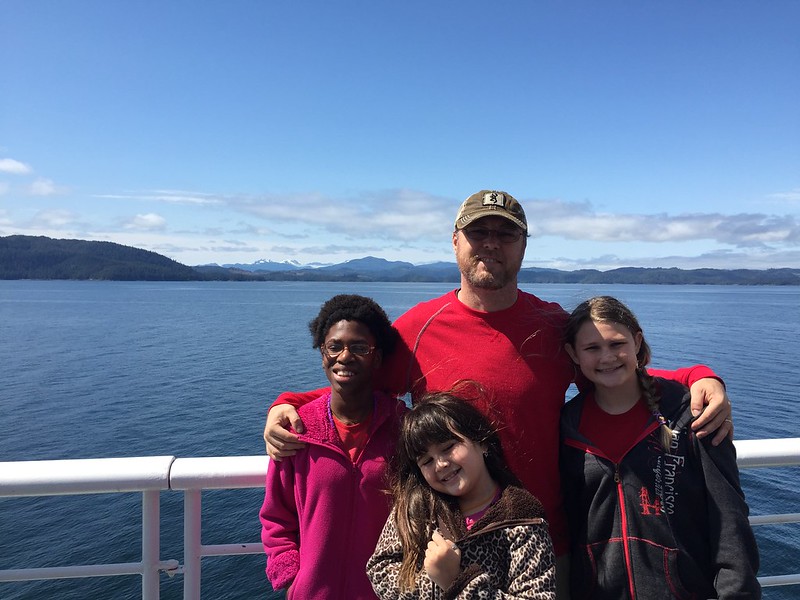 We were at sea all day Saturday and it was by far the longest day. The journey was absolutely beautiful! I was amazed at the little houses along the way in middle of (literally) nowhere. The girls passed the time either in our room watching movies and playing games or watching movies in the lounge. There wasn't much for them to do. Cathy and I wandered about looking at the scenery and watching the coastline go buy. The highlight of the day was the buffet dinner in the restaurant. 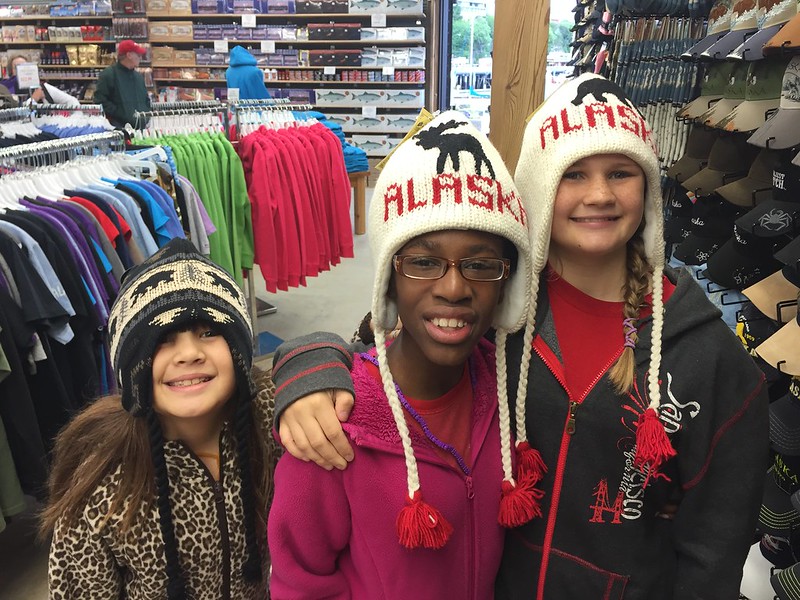 Sunday morning we pulled into Ketchikan at 7am for a three hour layover. It was the first of many stops that day but the only one with enough time to jump off and stretch our legs. Eventhough it was early, everyone wanted to get off the boat for awhile. We headed towards town and stopped for breakfast at this hole-in-the-wall restaurant called "Dave's". Afterwards we walked a mile or so down to where the cruise ships come in; this was called "downtown". We spent a hour or so wandering around with the cruise ship tourists before catching a cab back to the ferry. It was a little too "touristy" for us. 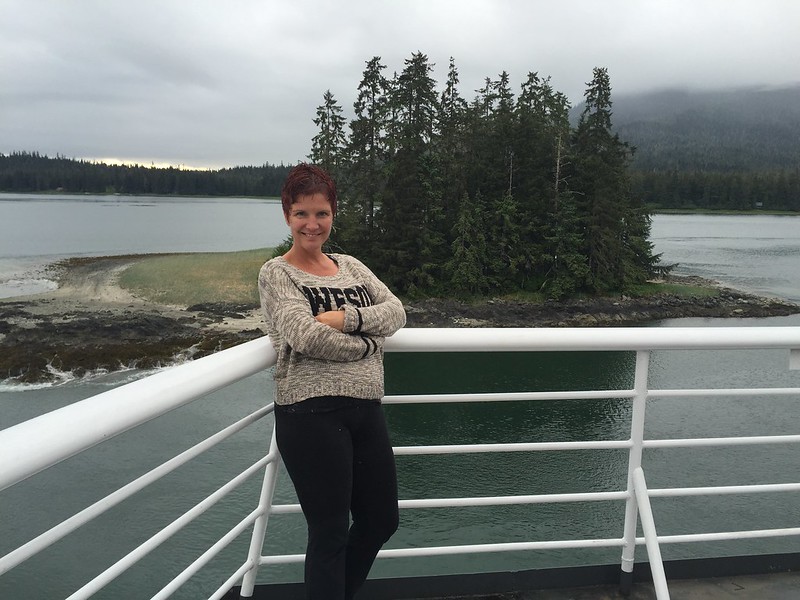 That night Cathy and I had "a night out" by ourselves while the kids opted to stay in the room and watch movies. We wandered around the deck (the weather was so "cathy" aka gorgeous) and then had a nice, quiet dinner in the restaurant. Alone... without chattering twits! Then we came back and watched movies with the girls in the theatre as usual. We tried to hit the sack early as we were getting off the boat in Juneau the next morning at 4:45am! 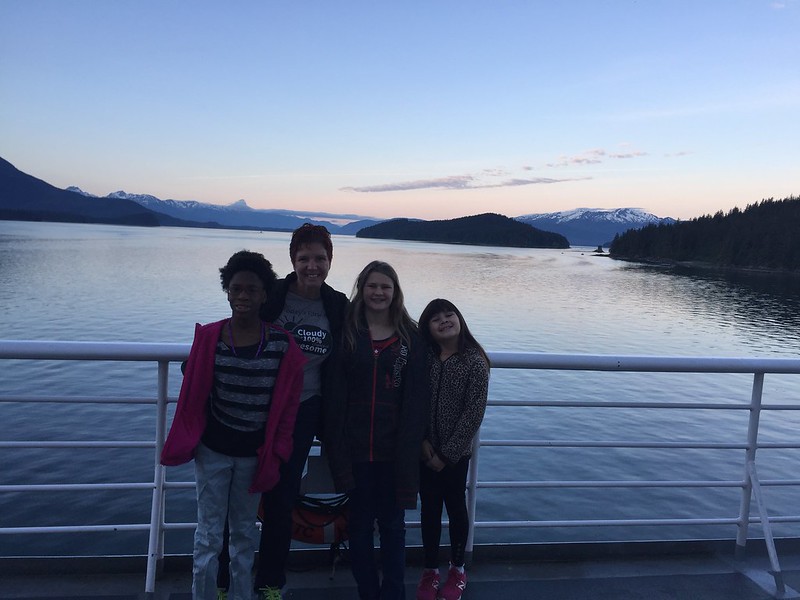 The morning came early but it's surprisingly light at 5am in Juneau and no one seemed to really care. We were in Alaska finally!! We pulled off the boat with ease and had two choices: left to "End of the Road" in 24 miles or right to Juneau. We chose right and drove 15 miles or so to downtown Juneau to kill some time. We weren't supposed to check into our RV spot till 3pm so we weren't sure what we were going to do while still hooked up. After we rolled past the tourist section of town we noticed that it was getting rather rural. So we looked at the map and noticed that we would shortly be at the end of the road. The only way to access Juneau is by boat and there are no roads that lead in or out. We had literally reached the end of the road. So we finally found a small dirt road and I executed a perfect three point turn (like a boss!) to get us heading back towards town again. I'm glad I put in some time practicing while in Olympia!! 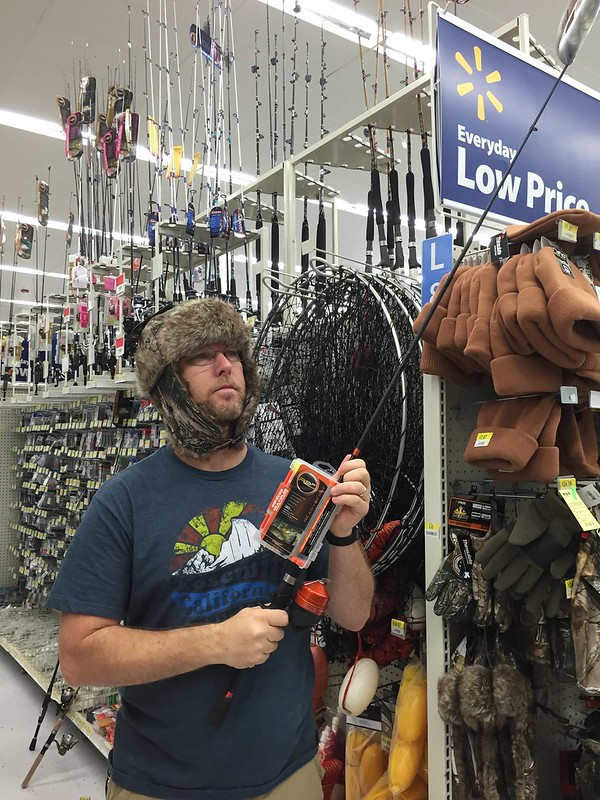 We'd passed a Wal-Mart on the way in from the ferry so we decided to kill some time shopping for necessities. We received some funny stares since it was only 7am but I got everything I needed to be a "native Alaskan". Over the next few days we'd make plenty of trips to Wal-Mart!! 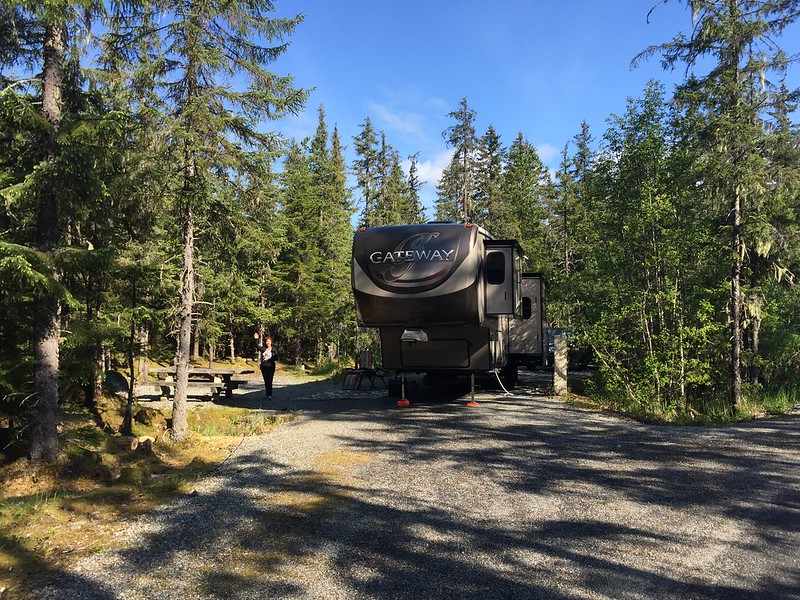 We were done shopping around 8am and were wondering what we'd do now. We were only 5 miles or so from our campground so we decided to take a chance and see if they's let us check in early. This was our first stay at a state park and we weren't quite sure now things worked. The campground itself was gorgeous. It was on the side of Mendenhall Lake which is part of the famous Mendenhall Glacier. Fortunately for us there is no check process at the campground. No front desk. No camp office. No anything. You just pull into your spot. If fact, we never ran into anyone that "worked" at the campground at all. It appeared to be totally on the honor system. 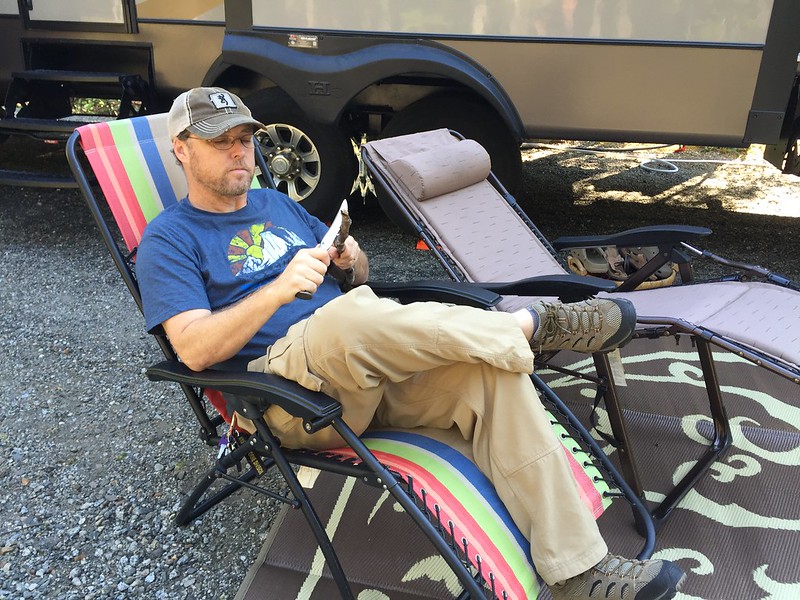 After getting setup we relaxed around the house for a couple of hours just soaking in Alaska. I started whittling Cathy a new kitchen table and made good progress on one of the legs. ;) The weather was absolutely gorgeous: sunny and warm (low 60s?)! The girls played in the woods nearby but we kept a close eye on them reeling them back in if they wandered out too far. There were signs all over about bears and we were paranoid. They looked like tasty little bear treats. 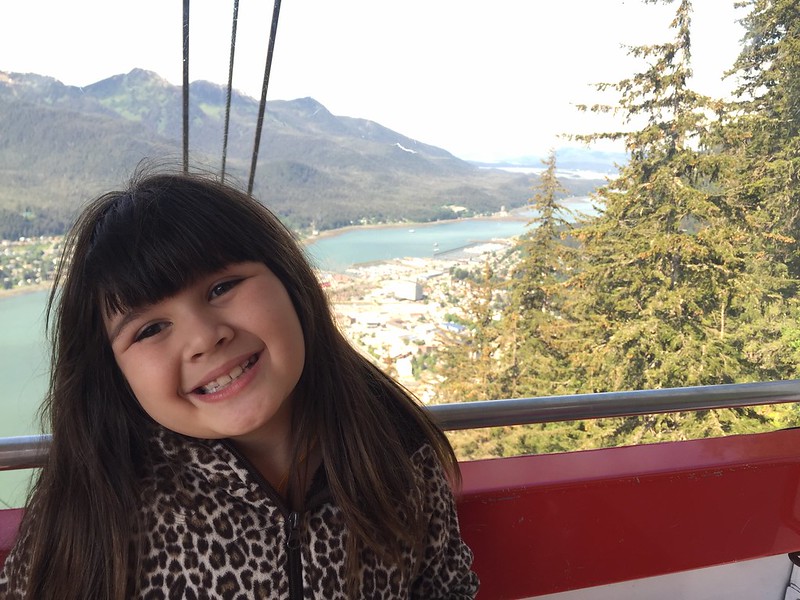 We'd been on that boat for three days and wanted to do something. So we piled into the truck shortly around 10am and headed back to town to do some sightseeing. We wandered around the shops for awhile and we met a really cute girl, Lani, that owned a massage store. She really like the girls and we talked for quite some time. Cathy's back had been hurting and she made an appointment (which she soon cancelled) for a massage. We'd run into Lani later.

Our first stop was the Mount Roberts Tramway to the top of the city overlooking downtown. We didn't hike the trails but everyone enjoyed getting a closeup view of the injured bald eagle they've had in captavity for 13 years. It was almost as big as Lexi! Probably the highlight was watching the 15 minute video about the native tribe in the area (Chilkat) and carving totem poles! We had chatted with a guy on the way up in the tram that worked in the gift shop carving this huge totem pole for customers. He was super funny and nice (we hit it off immediately) and everyone took turns carving the totem pole. A lot of fun!! 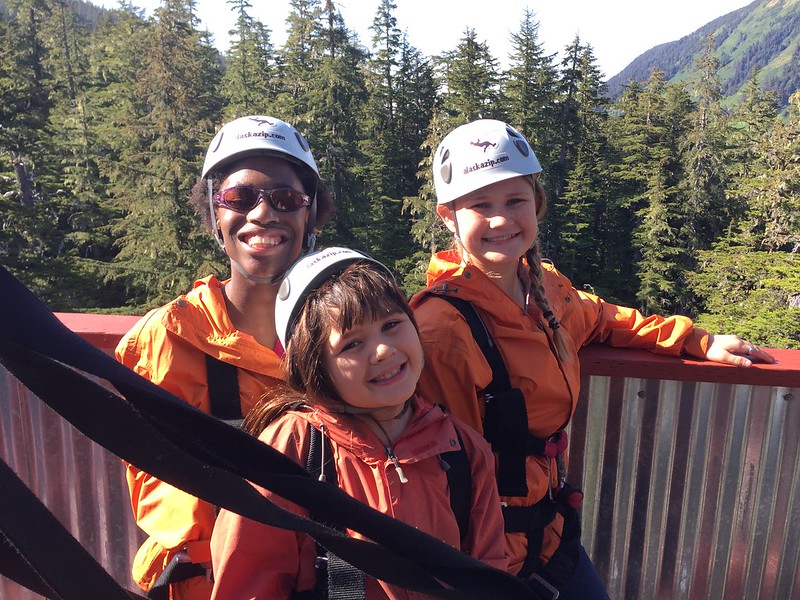 We didn't have plans for the day but I looked at the weather forecast and noticed that it was supposed to rain all day Wednesday; our ziplining day. So I called the company and asked if there was any way to get in that afternoon. We had lunch at the (not so kid friendly) Red Dog Saloon before meeting the zipling van at 2:45. Zipling was an absolute blast!! Lexi was a little more hesitant than we anticipated but Kira was all for it. No problem or hesitation whatsoever. She was a zipling champion. Hali of course was a rockstar as always. There are some great videos below so make sure to watch them. 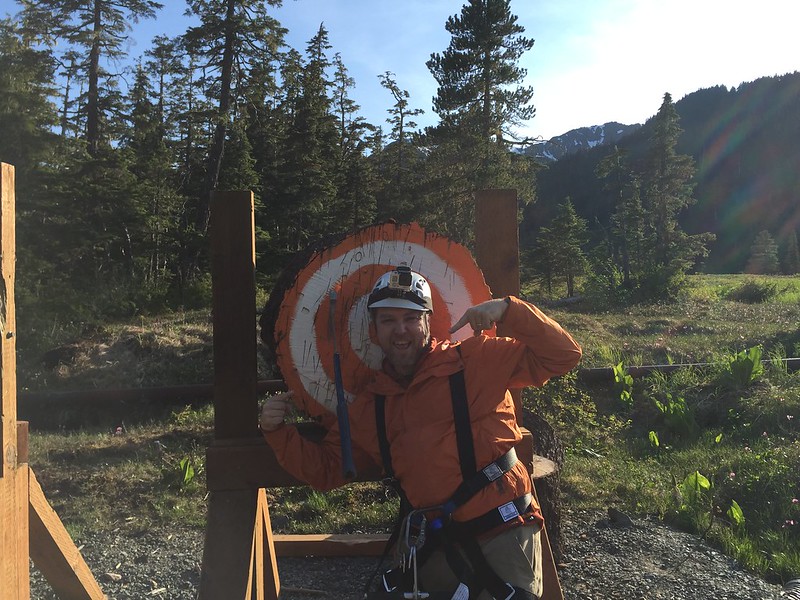 After ziplining everyone except Kira took a turn trying their hand at axe throwing. I was somewhat relieved she didn't want to participate. The thought of Kira handling, let alone throwing, an axe scares me to death! I was the only one to hit the target (with the sharp side) but Cathy was fun to watch. I missed with my first three throws and then switched to a different axe. I stuck it with my fourth so I blamed the first misses on a bum axe.

Everyone at Alaska Zipline Adventures were great but they failed us when it came to dinner recommendations. They sent us to Hanger Cafe down on the water which was horrible. Service was terrible and the food was only moderately good. 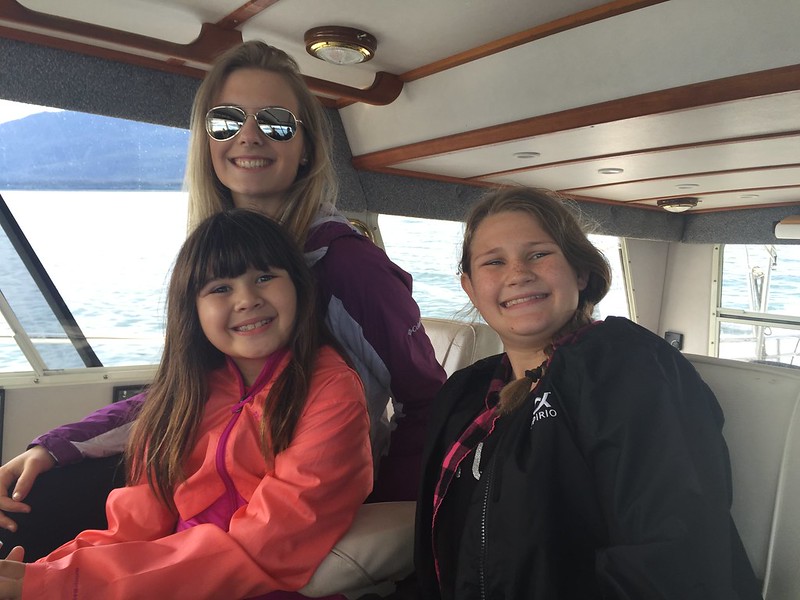 The next day we were up early for our whale watching tour at 9am. The tour was really small (us and another couple) so we had a blast hanging up top with the captain for nearly 4 hours. Capt. Alan was an Irishman that had relocated to Juneau 13 years ago and settled down. Extremely knowledgable and friendly. The girls immediately made "besties" with Amy, his 17 yr old deck hand. Amy entertained them for the majority of the cruise after they got bored with the whales. The girls coerced Amy to babysit so we just had to arrange a night we could go out. 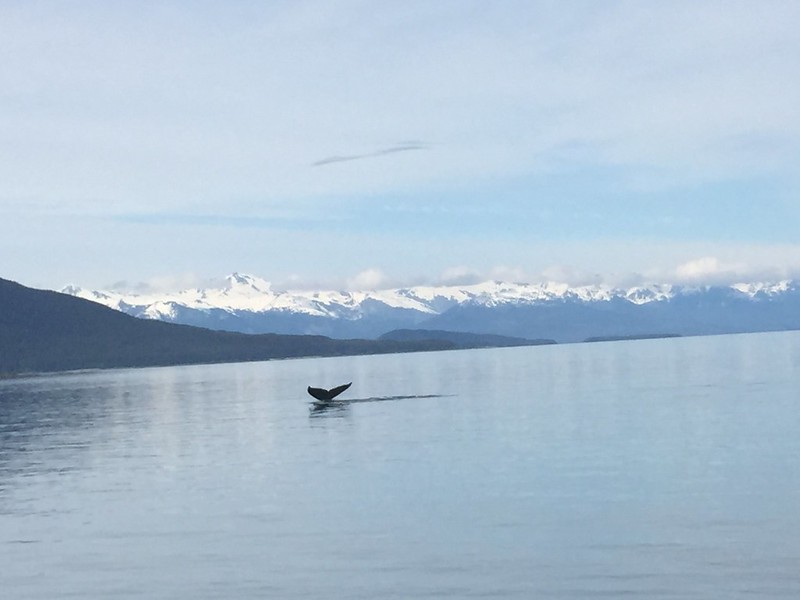 According to Capt. Alan, it was a great day whale watching. We saw a number of mothers and their calves and one juveline whale "breaching" (jumping out of the water) in the exact spot we were looking! I even encouraged Capt. Alan to name one nameless mother "Kira" since its distinctive tail was all black. It's hard to get good whale pictures but we have some below of whale tales and "slaps". 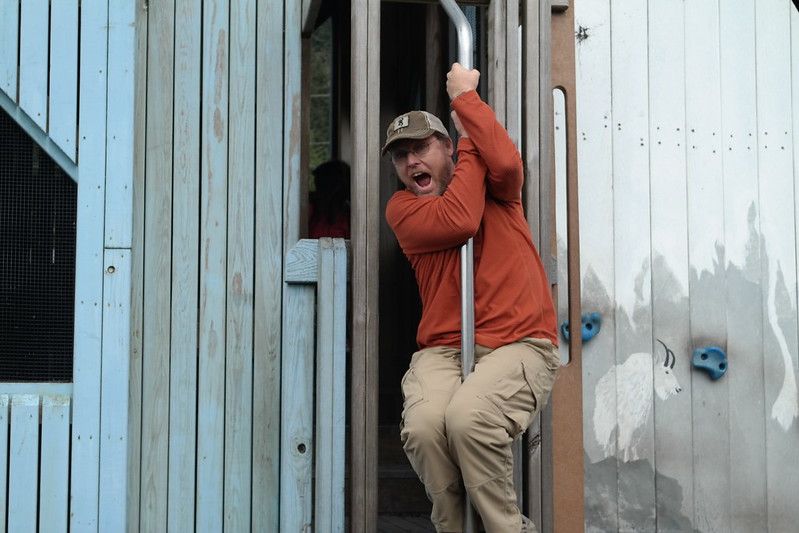 Afterwards we took Capt. Alan's recommendation and went across the bridge to Douglas Island for pizza and beer at Island Pub (apparently his second home). Everyone was full but we still wanted to spend more time outdoors. The girls had spotted an enormous playground while driving to and from Juneau so we stopped there so I they could play. They really know how to build playgrounds in Alaska! 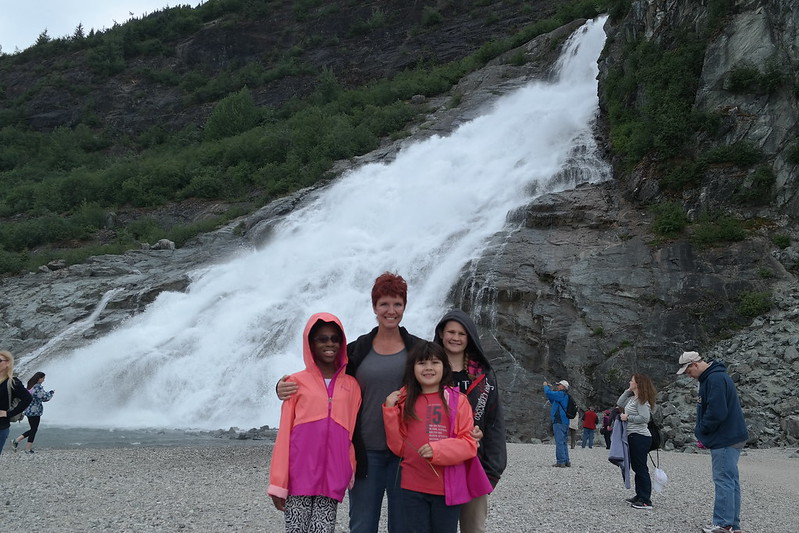 We decided to visit Mendenhall Glacier and Nugget Falls on our way home; they were literally right next door to the campground. We stopped at the Visitor's Center and walked 30 minutes or so to the Falls so we could get a good view of both. We took some pretty good pictures, stuck our hands in the glacierly cold lake and then headed back home. The girls wanted to sleep in the tent that night so we set it up and put them to bed around 9am. Cathy started thinking about bears eating the girls and decided she wanted to bring them in.

Sunday was normal day for us; Hali said we did "nothing" that day. We did laundry, gassed up the truck for the ferry in the morning and ran errands. Amy (the whale watching tour deck hand) was babysitting for us that evening so we were going to have a night out on the town. I had a massage that afternoon with the Lani (who used to work for Capt. Alan's wife also!) and picked up pizza on my way home. Cathy and I headed back to the Island Pub again for dinner and started talking to a guy that sat down next to us at the bar. It turned out that he was a friend of Capt. Alan's and he was meeting him there. A few minutes later Capt. Alan walked in and sat down next to him and we started chatting. Apparently Juneau is a small city!! 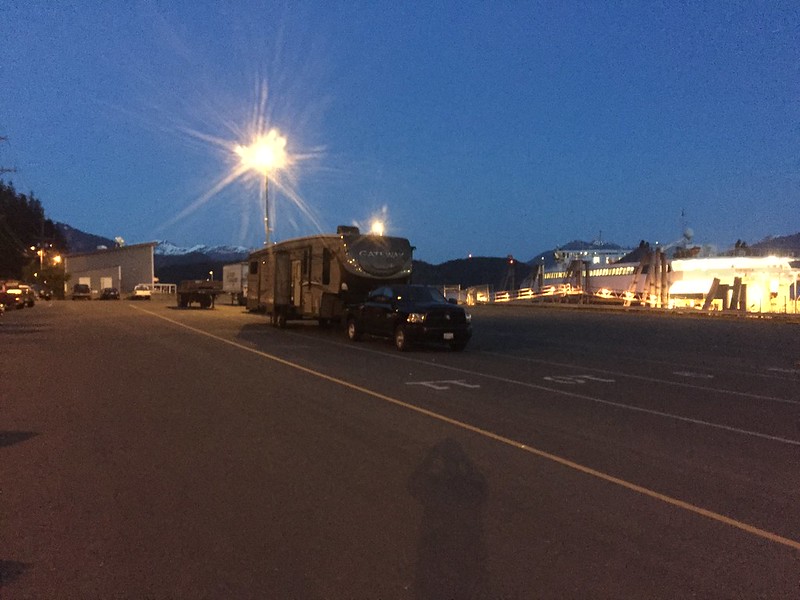 After dinner we made one last stop at Wal-Mart, headed back home and packed up the RV. Our ferry for Haines left in the morning at 7am which meant we had to be there by 5am. So instead of getting up early, packing up, hitting the dump station and then heading to the ferry, we decided to head over to the ferry and sleep in the parking lot instead. Hopefully it would make the girls easier to handle.