Our Anchorage stop consisted of 3 days getting to Anchorage and three days actually in Anchorage. We'd heard from a number of people that the city was "big and dirty" but we enjoyed it. With a population of 300K, it's a good size city with all comforts of home (malls, chain restaurants, etc.) plus 9 breweries! It's somewhat cramped and in the process of growing up (there are new neighborhoods and tall buildings going up everywhere) but it's very bicycle and family friendly. I could definitely spend more time in Anchorage. 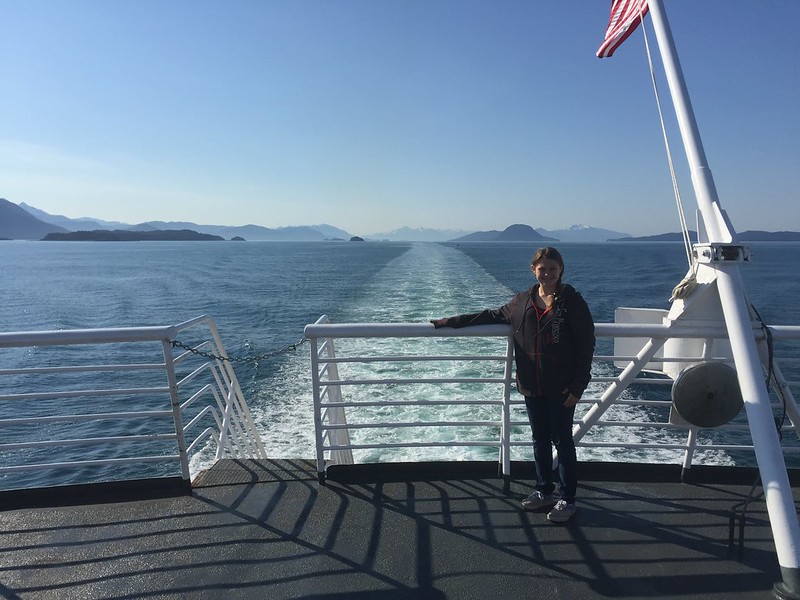 Our journey to Anchorage started in Juneau. We were taking the ferry from Juneau to Haines so we setup the RV in the parking lot the night before. We woke up at 4:45am as we had to checkin for the ferry at 5am. We got everyone ready, folded up the house and pulled into line about 5:45am. Luckily we were one of the first vehicles to load this time! It was a 4.5 hour trip to Haines and we spent most of the morning in the galley eating breakfast and watching movies until we docked at 11:30am.

The ferry was much smaller than our first one, probably half the size, which made our exit interesting. They wanted us to make 180 degree turn in an area that obviously wouldn't support it. Cathy started to freak out and I literally told her to shut her mouth during the process. However, the guys were pros and after about 15 minutes of maneuvering the RV around they got us out with no problems! 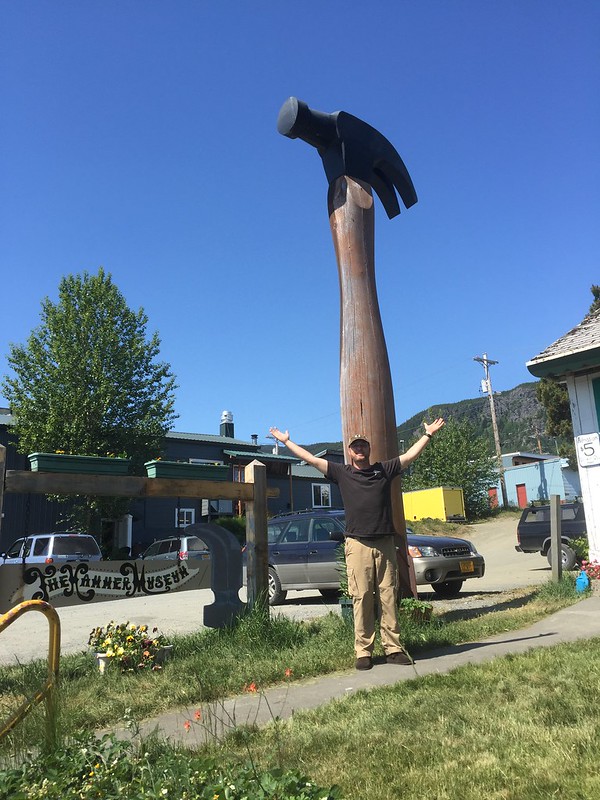 We exited the ferry about 10 miles from Haines and decided to stop for lunch before heading off on our trek. We parked the RV on a hill (which made me nervous the entire afternoon) and started to walk around town looking for things to do. Apparently Haines is a retirement community with about 4 blocks of "downtown" and a handful of shops and restaurants. We had an OK lunch down by the water and then Cathy took the girls to Safeway for travel snacks while I toured the Hammer Museum. The museum was the only reason that I wanted to stop in Haines. I wanted to be able to say that I "got hammered in Haines"! 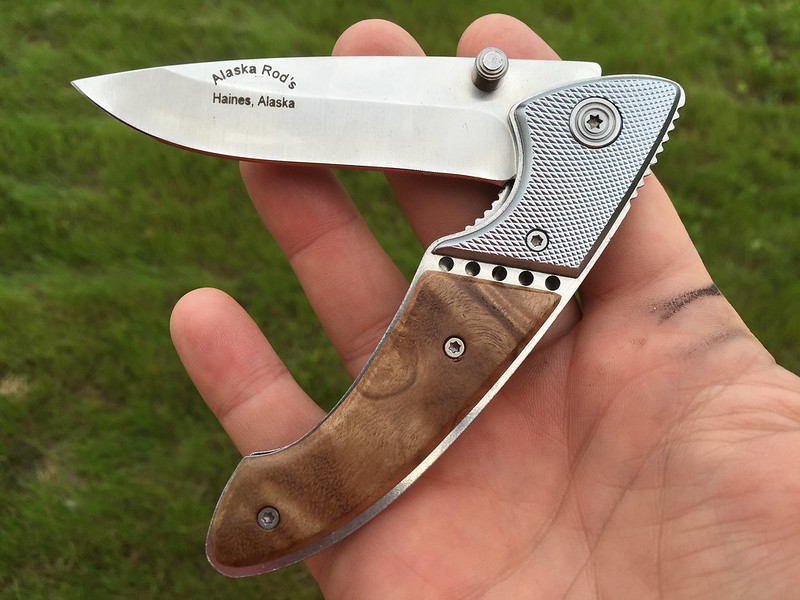 I'd been looking for a new pocket knife since we arrived in Alaska and one of the stores directed just up the hill to the "best knife maker in Alaska". So I stopped into Alaska Rod's on the way back to the truck and bought this awesome knife from his wife as soon as I saw it. He makes all of his knives on site and they are reasonably priced. Now I'm ready to defend my family against bears!

We piled back into the truck and headed towards Anchorage. Google maps said it was a 15 hour trip so we decided to break it up into two (which eventually turned into three) days so we wouldn't kill the girls. After a 45 minute drive through beautiful Alaskan scenery we hit the Canadian border. 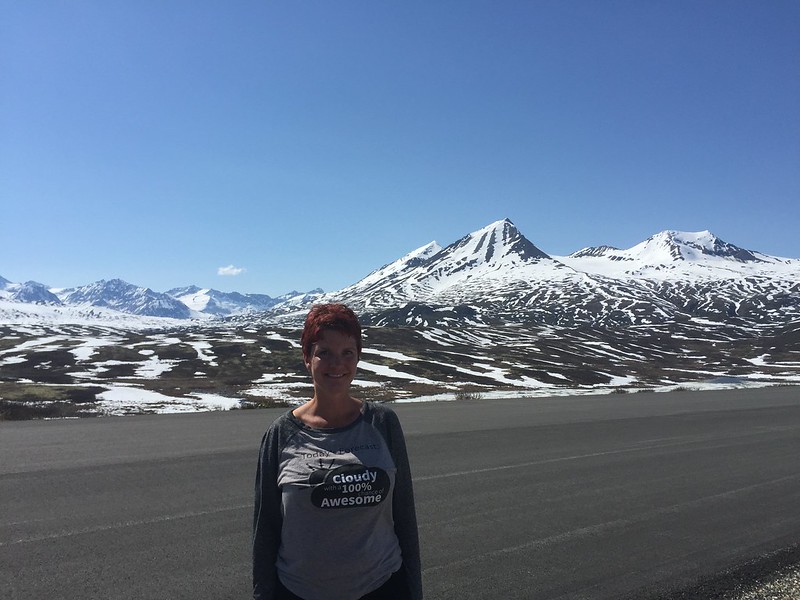 We'd spend the rest of the day driving through the beautiful Yukon. It was 79 degrees and sunny with snow capped mountains. Very strange. We appeared to be the only ones heading north and I think we counted 14 or so cars during the 5-6 hour trip. It seem deserted. We'd heard stories of how bad the "Alaskan Highway" was but the road through the Yukon was pretty nice.... until we hit Destruction Bay for gas and food. The official Alaskan Highway" starts just north of Destruction Bay and it was aweful; just as bad as stories depicted it. When we weren't driving throughout dusty, bumpy road construction we were trying to avoid patched roads that shook the entire truck and RV. Since the Canadians seemed to be inept at fixing roads (the American side was far better!) they placed flags wherever there was a bad patch of road. They also have what are called "frost heaves" which is when the road freezes and thaws. This causes the road to form ripples or "mountainous bumps" that make you feel like you are riding a roller coaster. It really does a number on the shocks and scares the crap out of you. Fortunately, constantly dodging potholes and scanning for ditches, craters and frost heaves kept me wide awake while driving the Alaskan Highway. 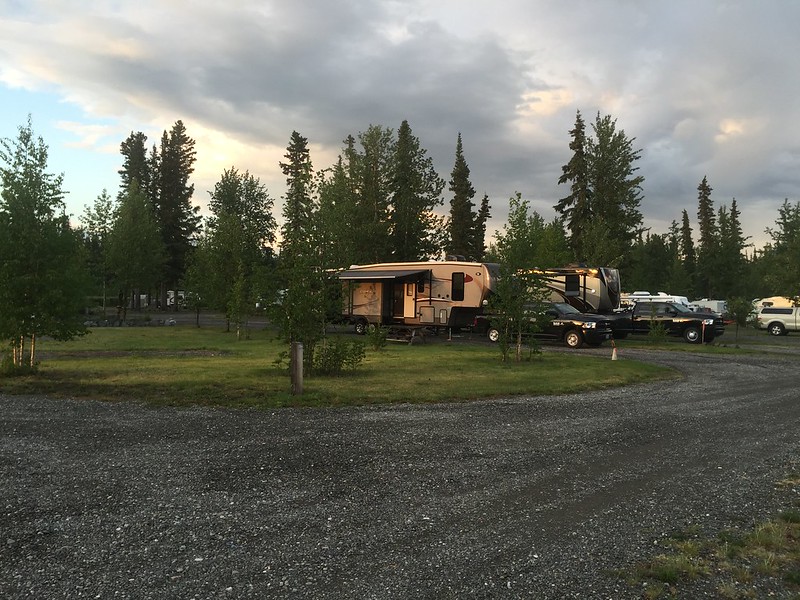 Cathy had found a RV park called Discovery Yukon Lodgings just shy of the US border in the middle of nowhere (literally) which was billed as "an oasis on the Alaskan Highway". It was. Apparently everyone stops there for the night while traveling the highway. Everyone was super nice and we got a good night's sleep before taking off in the morning.

It was only 30 miles or so to the border and the roads were again a mess. However, they improved considerably as we approached Alaska. The US border guard was really nice but we had to toss our eggs and uncooked chicken from our fridge. Cathy was sad. The Alaskan Highway in the US is much better. I'd give the Canadian portion a D- and the US portion a solid B. The road was much smoother and the "bumps" they marked with flags were almost laughable in comparison to Canada's. The flags weren't needed. 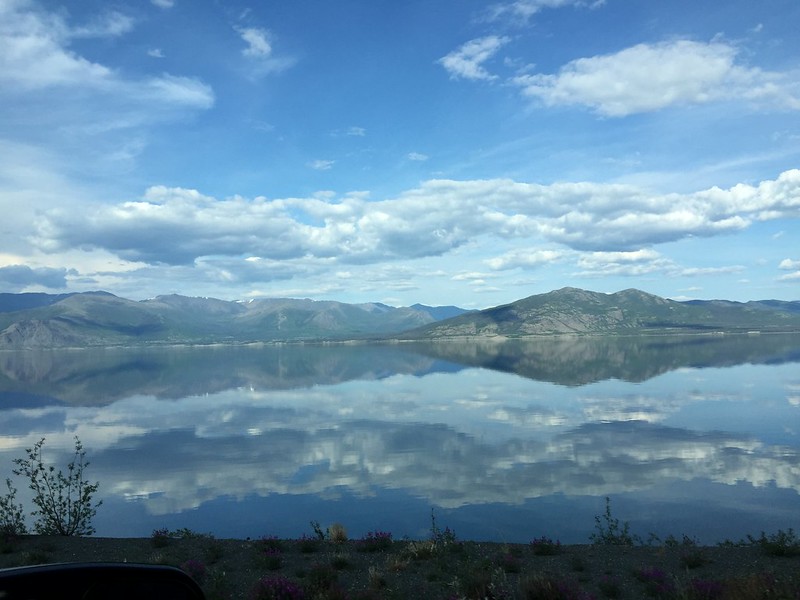 We stopped in a couple of small "towns" along the way for gas whenever we could find it. We took a little more time in Tok to stretch out legs and wash the highway off the truck and RV. We drove a couple of more hours and decided to stop in Glenallen for the night (3 hours outside of Anchorage). Everyone was done traveling for the day and the weather was beautiful. We found an RV park off the highway and decided to relax for the rest of the day. Unfortunately the mosquitos were everywhere and we couldn't stay outside for longer than a minute or so else you'd pass out from blood loss. This was the first time we'd really encountered any bugs in Alaska. 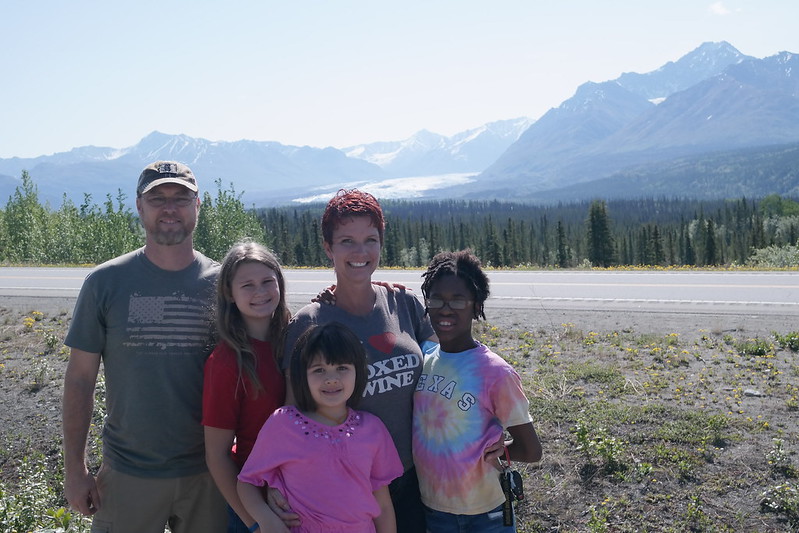 The next morning we got up early and took off for Anchorage. Our plan was to take some time to see the Matanuska Glacier but apparently we missed the entrance. However, you can't get that close to it and, honestly, it wasn't that impressive. We finally rolled into Anchorage early in the afternoon and got setup. The RV park was nothing special but it was near town and clean. 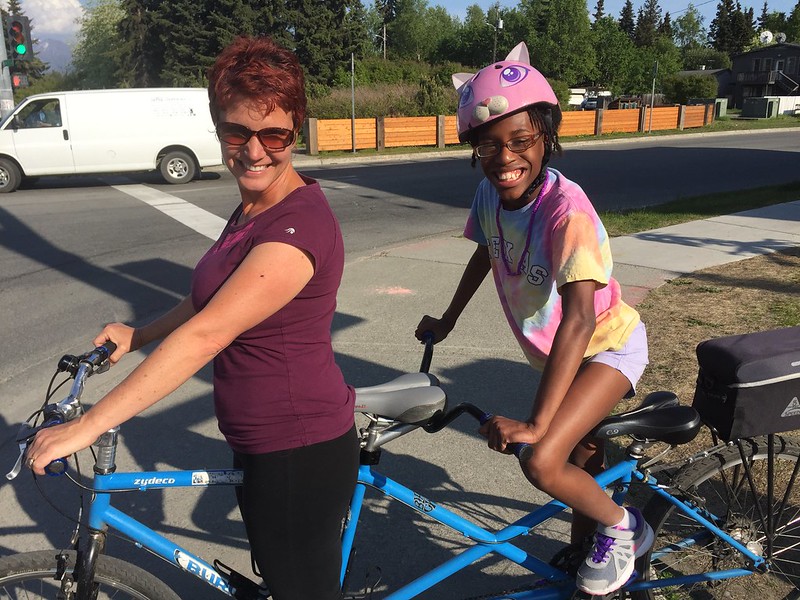 I checked the weather and apparently this was going to be the last sunny day for a quite awhile so we decided to load up the bikes and head to the Tony Knowles Coastal Trail to do some riding. We stopped downtown and rented a tandem bike for Cathy and Kira before taking off. Kira loved it and peddled quite often while mommy took breaks. Check out the video of her in action! 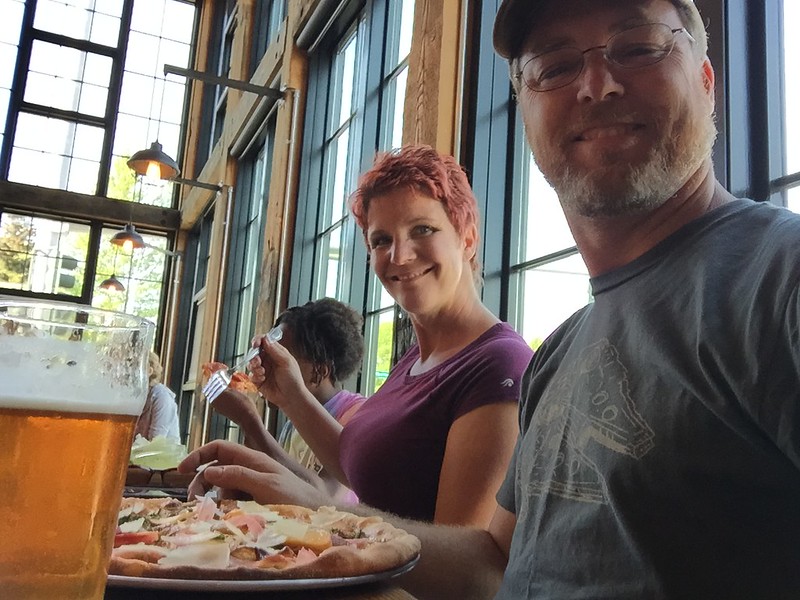 We peddled around the city for an hour (also called "getting lost") before finding the Rustic Goat for dinner. It was an awesome, trendy, hipster little place with great pizza and local beer. Everyone had a blast! I got the prosciutto and peach pizza and the girls killed a pepperoni! I had one too many beers (that's three for everyone counting) so I was a chatty-cathy with the wait staff. We biked for another hour or so before dropping off our bikes and doing a little window shopping downtown. 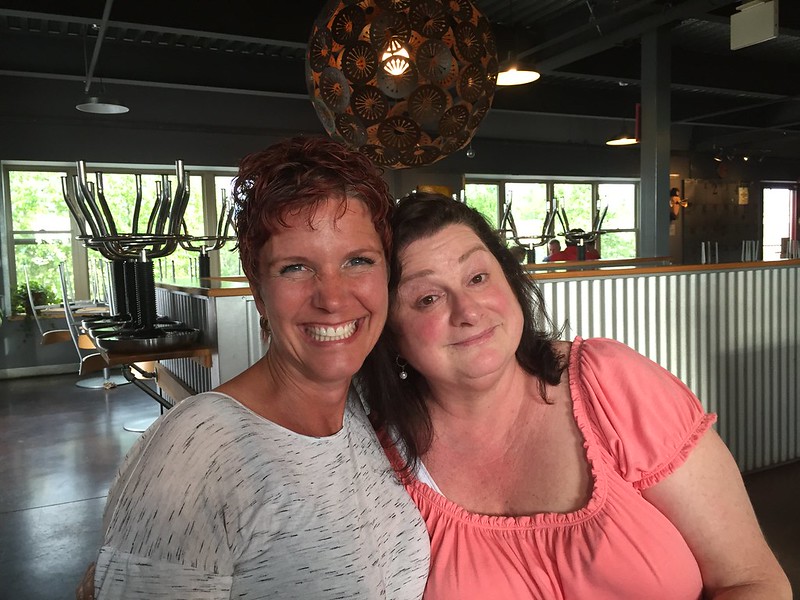 Monday it rained the entire day so we did indoor stuff. Right after lunch we saw the movie Tomorrowland and then went to the mall and Walmart to kill time before dinner. We were meeting one of Cathy's ex-coworkers that had moved to Anchorage for dinner at the Midnight Sun Brewery. Breweries are always a hit with the girls and I quite fancy them as well. The food and beer was really good, although I had higher expectations based upon what I had heard from people in Juneau. We ended up closing the place down (at 8:30pm) catching up with Paige and getting more info on Alaska.

Tuesday was an exciting day! It was Cathy's Birthday plus it was time to pop the cap on our first batch of "Jali RV IPA" beer! 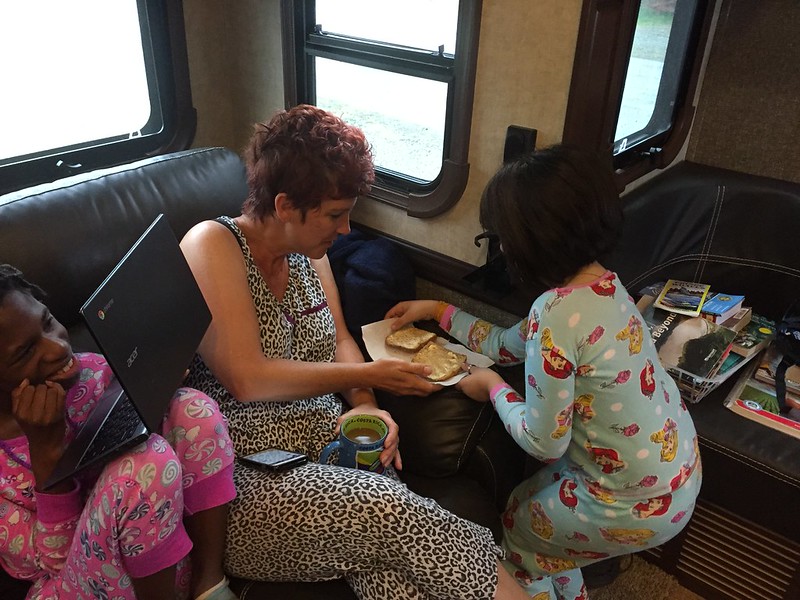 Tuesday was Cathy's 29th birthday so it was all about her. Lexi made her breakfast and gave her a coupon for a 90 minute massage!! It rained the entire day so we sat around watching movies and Hali made her now-famous potato soup for lunch. I had an eye appointment that morning but I forgot to get Cathy's card so I had to dash out under the guise of getting ingredients for Hali's soup. Cathy wanted sushi for her birthday so found Jimmy's Sushi for a pretty good meal. Everyone was stuffed when we got back home so we just sat around the house and watched TV. 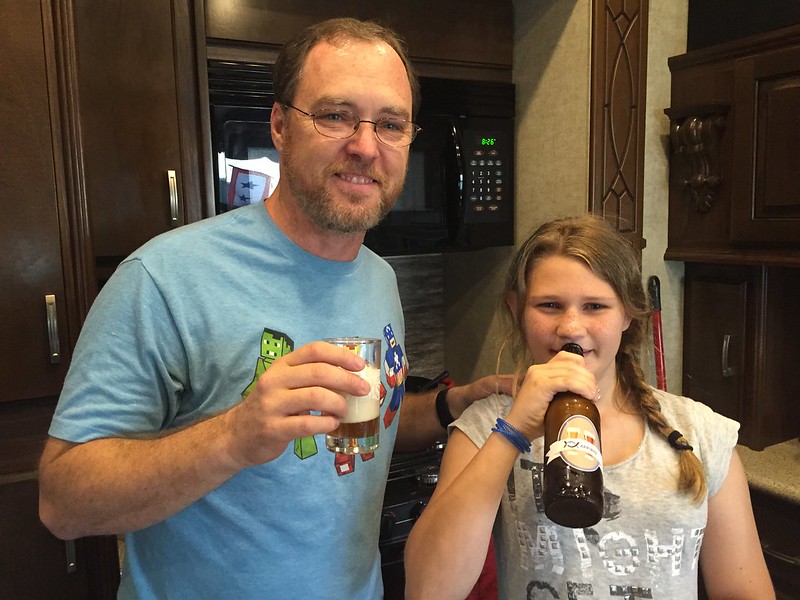 Before we went to bed Hali and I had our first sip of our "Jali RV IPA" beer that we had been brewing for a couple of weeks. Not a bad IPA but a little sweet for me. Check out Hali's reaction to her first sip of beer in this video. It's priceless.

Hali's meds arrived arrived on Wednesday so we could finally take off for Seward. We packed up and pulled out around noon in the drizzling rain and made our way south for our next stop.