We knew the awesome weather in Alaska wouldn't last forever. It was cloudy and rainy for most of our stay in Seward but we didn't let that get us down. We still managed to do some hiking and visit some glaciers but postponed our dogsled tour due to rain. 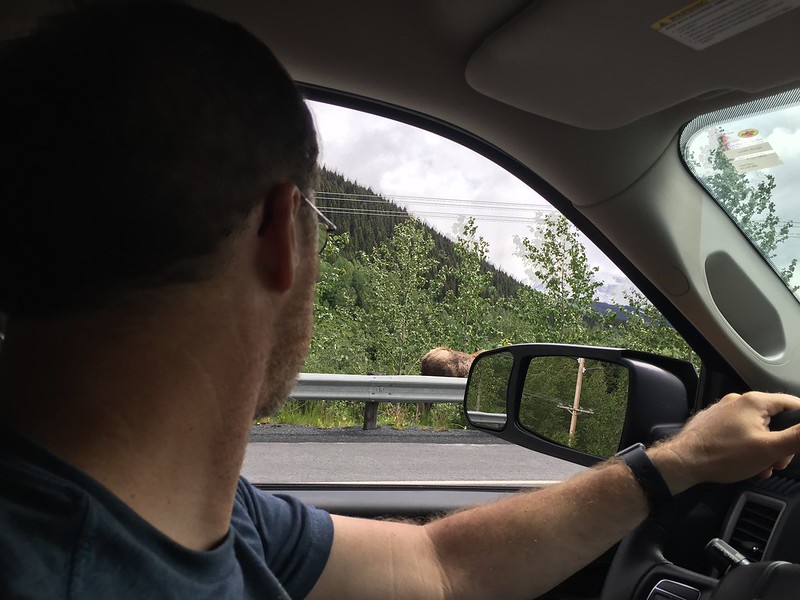 We took off for our short 2.5 hour drive from Anchorage to Seward in a steady rain. About an hour out of Seward we came around a corner and the oncoming car was flashing its lights. Being from Kentucky, Cathy immediately thought there was a speed trap ahead. Apparently in Alaska when an oncoming car is blinking its light it means that there is moose nearby and not police. Unfortunately Cathy was too busy screaming "moose" and pointing for the girls that she couldn't get her camera out in time before the moose and her calf leisurely hopped the guardrail and disappeared into the forest. We placed a $1 bounty on the next moose spotted by the girls.

We finally found the RV park after our GPS took us astray and we turned around a couple of times. It was quite a ways off the beaten path (the main road/highway) but it was big and clean with a great view of the mountains. It was nearly dinnertime so after we got setup we headed into Seward to check out the town and grab a bite to eat. As we drove through town Cathy had a little bit of RV park envy when we passed the multitude of RVs parked along the water in the city park. Cathy immediately regretted her decision to pay for 4 nights in the middle of nowhere. 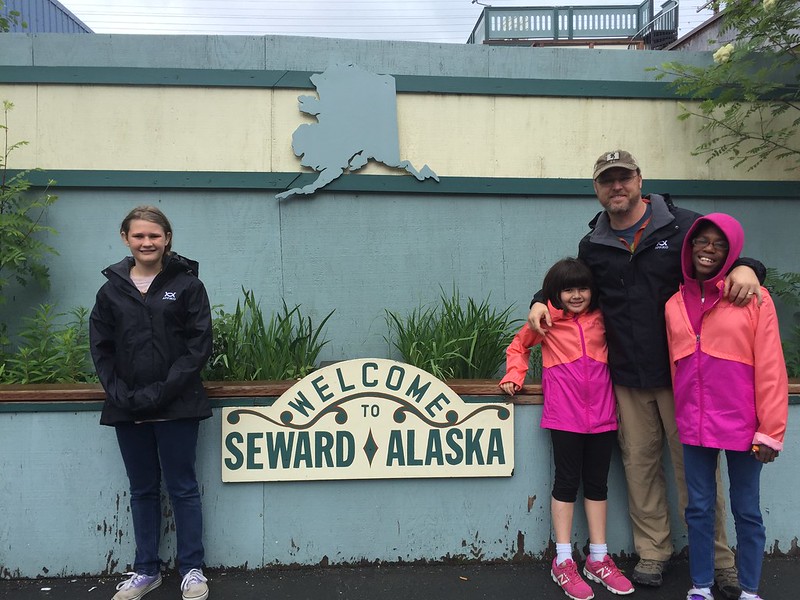 When we spotted the Seward Brewing Company the two bookends immediately voted to go there while Cathy and Kira wanted pizza. I cast the deciding vote (which was never in doubt) and we had a lovely dinner at the brewery (it looked like the "finest" restaurant in town). The food and beer was really good and the decor was really cool! Lexi had the $4 root beer and the $14 salmon kid's salad which I gladly finished off when she decided she only wanted the lettuce. 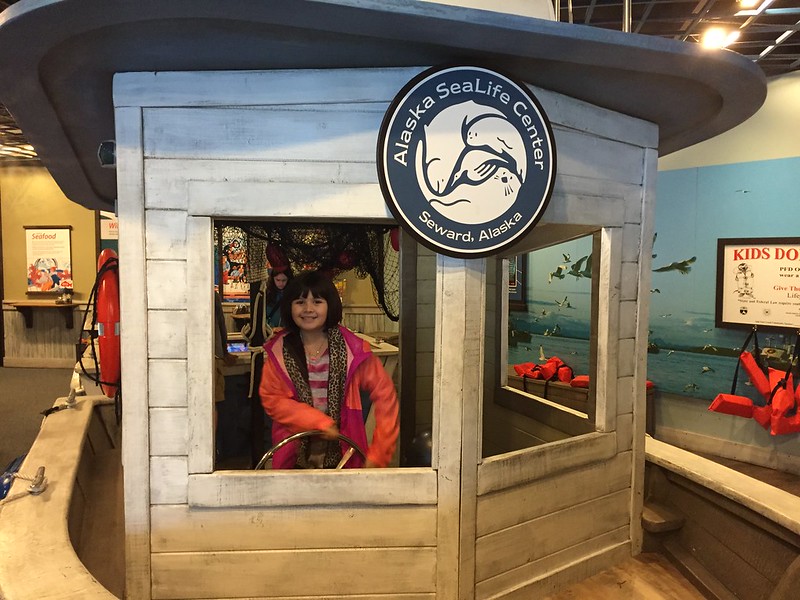 Thursday Cathy was deathly ill but she trudged on like a trooper. Since it was still yucky outside we skipped hiking at Exit Glacier and took everyone to the Alaska Sealife Center instead to see the seals, sea lions, birds, otters and other fish. We stayed a little over an hour as Cathy started to die in one of the chairs. We took her back home and tried to put her to bed but she slept in one of the chairs instead. For dinner I drove back into Seward and picked up a pizza from Eureka Pizza. Cathy was well enough by that time to at least eat some crust. 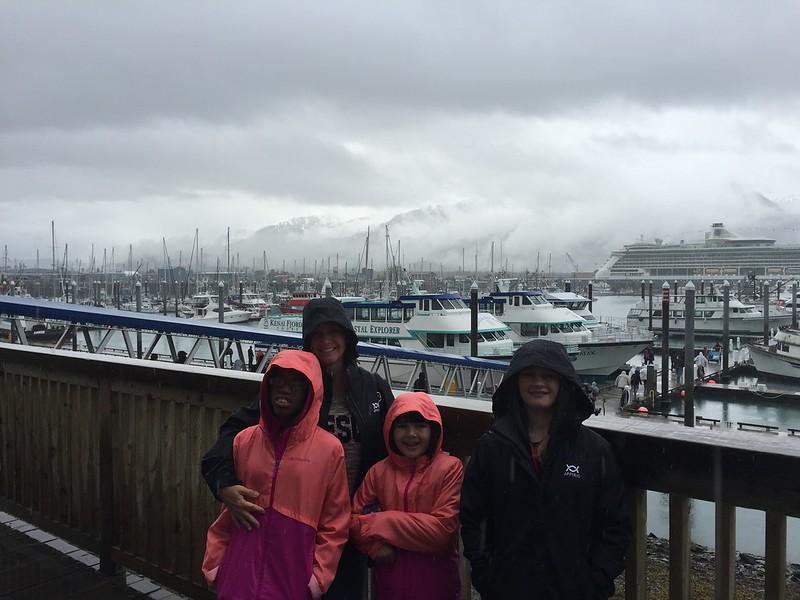 Friday was another crappy, rainy, cloudy day. We had a helicopter/dog sledding tour booked for that afternoon but I called and postponed it. The weather was just too crappy even though the tour was still on. We would rebook it later when the weather was nice.

We met our neighbors when their little dog ran into our RV and they asked if we were going on the Kenai Fjords Tour. We hadn't planned on it but it got us thinking. Instead of staying in the RV in the rain, why not just take the 6.5 hour boat tour (in the rain) to see the glaciers. So with a little stress on Cathy's part we got everyone ready and headed down to the docks and boarded the boat at 11:30am. It was a brand new catamaran with a capacity of a couple of hundred people and they even had lunch and beer on board! 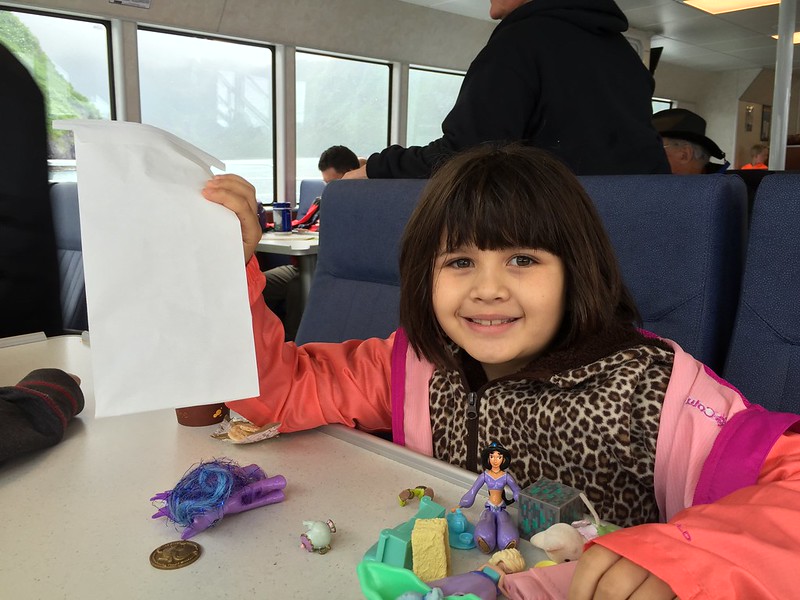 We spent most of the time looking at sealife in the Fjords on the way out to the glacier but there was one 45 minute stint out in the ocean with 10 foot swells that was not fun. A number of people became sick including Lexi. She puked twice (once in her lap and once in a bag) and was not a happy camper. I did a pretty good job standing up with Hali and keeping her focused on the horizon and keeping her mind on things other than her stomach. Kira was a champ and nothing affected her! She just kept on playing with her toys like nothing special was going on. Perhaps having an absence of balance makes her impervious to rocking boats. I think she needs to be a pirate when she grows up. 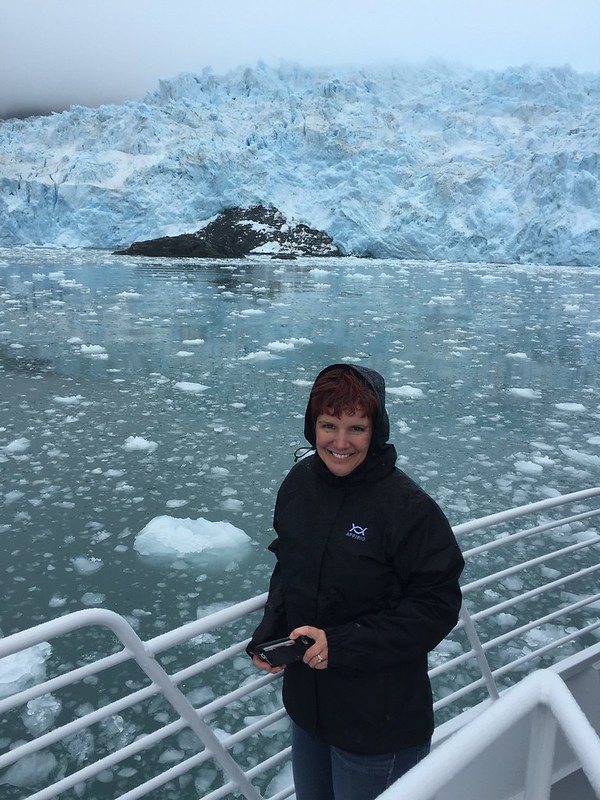 Needless to day, the Aluite Glacier was amazing!! The boat stayed about 100 years from the glacier for 30 minutes or so as we stared in amazement and listened to the sound of calving ice. This is my favorite video. They even scooped up a few basketball sized chunks of ice for us to hold and me to taste! This was definitely the highlight of our trip to Seward.

We took a different route back to port and spent less time in the open water but it was more intense. Fortunately Lexi was find this time. We saw some humpback whales (not as good as our whale tour) and did run into a pod of Orcas with 3 adult whales and one baby. Afterwards we simply headed home to eat dinner, watch movies and fully recover from the boat trip. 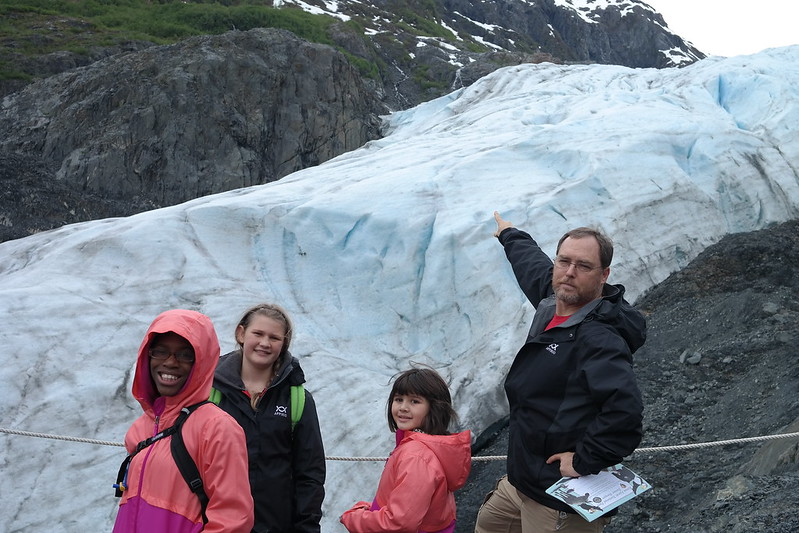 Saturday was our last day in Seward and we wanted to do something outdoors. It was still cloudy but luckily only sprinkled occasionally throughout the day. We decided to grab our rain jackets again and take the short trip to Exit Glacier. The is one of the few glaciers that you can actually walk to and really see it up close. It was only a mile walk to the glacier so the girls didn't put up too much of a fight. Hali and Lexi checked out the Junior Ranger kit at the ranger station so they were on a mission to get their badges. The glacier was really cool and we took some awesome photos along the way!

The next morning we packed up and headed to the other side of the peninsula to Soldotna & Kenai!