Today we are in Kenai, AK celebrating our one year anniversary on this crazy trip across America. We've hit 30 states so far and even though we have a few more gray hairs and a few extra pounds, everyone is happy, healthy and having a great time. Looking back here are some recollections of our trip so far.

There's too much to see and do in America.

Our original plan was to allot 2 weeks to visit each state. However, we knew we'd spend more time in states like MA, AK and CA and less time in places like OK, DE and VT. Initially we felt the urge to see everything we could in the places we visited and felt guilty if we stayed home for a day or two. There was so much to see and do. Just as we'd leave somewhere, someone would ask us, "OH!! Did you go see such-n-such place? It's amazing!!" However, we were just doing too much and it started to wear us down. There have been many occasions that they girls have begged us (literally) to stay home. We've started to take days off where we just do nothing but stay at the house and let the girls play.

Everyone has gotten along great given the fact we've been together 24-7 for the past 12 months in a 41' RV. It's a little cramped sometimes but for the most part we're calm, patient and understanding when personal space is violated. You'd expect a certain amount of arguing and bickering between 3 little girls but for 99% of the time they've been fantastic. No knock-down ,drag out fights or screaming matches with "I hate you" at all. They've been good as gold and it's been amazing how close they've become. Now, the "conversations" between Cathy and Hali are a different story. She recently turned 13.

One of our major concerns with this trip was keeping Hali healthy. For the most part Cathy has been quite successful. She's had a few small issues getting meds shipped to the right location at the right time but she's managed it like a boss. We've flown Hali back to St. Pete three time to see the CF clinic and she has an appointment at the CF clinic in Anchorage next week. Whenever something more serious than a simple cough pops up, Cathy is on the phone with the CF team getting more meds or instructions. The CF team in St. Pete has bent over backwards to help us and we couldn't have kept her healthy without their assistance.

Eating is easy, exercising is hard

OK, we've gained a few pounds along the way; roughly 1/2 lb. per state to be precise. We typically explore the local city after work and school and that usually involves dinner. We often look at photos from early on in our trip and wonder who those skinny, good looking people are with our kids. We've tried to exercise along the way with some success but sometimes the weather or location doesn't cooperate. I brought my tri-bike with us thinking I'd get some rides in but sent it home while in MA. We're typically in a location for 4-7 days and it's hard to find places to run let alone ride. We may be out in the forest with no roads or in the city with no sidewalks or shoulders to run on. On a number of stays we've just run around inside the RV park. Cathy and I have made a pact to run more... but it's always "tomorrow".

Homeschooling was new to us and Cathy was somewhat anxious on how it would go. We started out in Cape Cod using K12 and hated it! After a couple of weeks of daily crying, fighting and drinking we switched to Time4Learning and things have been much better. The girls were all successful and excelling with their school year and everyone is quite happy with the results! Some of the girls need more one-on-one attention and home schooling allowed Cathy the opportunity to help out in those certain areas. Learning has become a 24-7 experience as we weave learning concepts into everything we do.

Working in the cloud

Work has been going as well as I expected with no issues. The girls and I need internet for school and work so we typically don't camp far from civilization. With Verizon I almost always 4G connectivity so it's really no different than working at home. I work on east coast time no matter where we are so as we've moved west it's become convenient since I'm an early riser. I'll start at 5am (8am EST) and finish around 3pm PST if there's nothing going on later in the day. However, there's been plenty of days where I've worked till 5/6pm PST (12 hours) without even realizing it.

Our path across the country hugs the coasts and gravitates towards mountains. We've done a lot of hiking and Kira has become more confident along the way. The two bookends are pretty good about hiking and climbing but would rather be on Youtube watching Minecraft or fairy videos.

Biking has been another favorite activity but we haven't done it as much as we'd like. We found some great trails in Falmouth, MA and Anchorage, AK and had an absolute blast. Probably some of the best parts of our trips. Lexi learned to ride in Plymouth, MA and we can't keep her off her bike. We bought a tag-along bike in MA that hooked to Cathy's bike for Kira but it was too small and she didn't like it. Kira did much better on the tandem bike we rented in AK.

Cathy has been dragging everyone to cave tours around the country. Mammoth Cave in KY was awesome (of course) but the rest just seemed OK to me. The girls seem to like them but I'm about done with them.

It's no secret that we (I) like visiting breweries. It started in Maine and has been a continuing trend across the country. I think we've hit almost 40 so far. Besides the good beer, breweries seem to have great food so they are a win for everyone. However, I went a little overboard in OR and Cathy had to implement a temporary embargo.

San Diego was a life-changing stop for us. We started our journey in a little 31' Class C and realized about 6 months into the trip that we needed something bigger with a bedroom for the girls. I think it was somewhere around TX we got the itch for a new, humongous fifth wheel RV. We got close to buying a new one a couple of times but everything finally clicked in San Diego and we found the perfect the one for us. From that point on it seemed more like living and less like traveling.

Like everything else in life, things go wrong and we've had our share. The first month on the road I dumped a cup of coffee on a power strip and shorted out our entire RV. We haven't had the best luck with our new RV and truck. Within 6 hours of getting the new truck Kira opened her door into a boat trailer and put a small dent in it. Then our first time unhooking the fifth wheel we dropped it onto the tailgate of the truck. A month or two later Cathy "barely tapped" the kingpin plate on the RV with the truck to the point that we couldn't open the tailgate. Good times!

We've also had a couple of trips that were total disappointments. The girls were really excited to visit Disneyland in CA but it was a slightly disappointing. The park is tiny, the lines are long (no guest assistance passes!) and the rides are lame. We were excited about Fantasmic but it was nothing like Disney World. The show was along the river with no seating. We had to put the kids on our shoulders in order for them to see. Definitely not a good experience and we won't be going back.

Unfortunately our Grand Canyon day trip was a bust as well. We took a 4 hour train ride to the Grand Canyon during the first major snow storm of the season. It was a total whiteout and we were not able to see any part of the Grand Canyon. However, we had made plans to visit again next summer as Lexi wasn't tall enough to take the donkey ride to the bottom.

Cathy and I compiled a list our favorite cities and they all coincided with great weather in that area. It may not be fair but the weather at the time of our visit impacts our feelings for the area.

We polled the girls and these are their favorite cities: 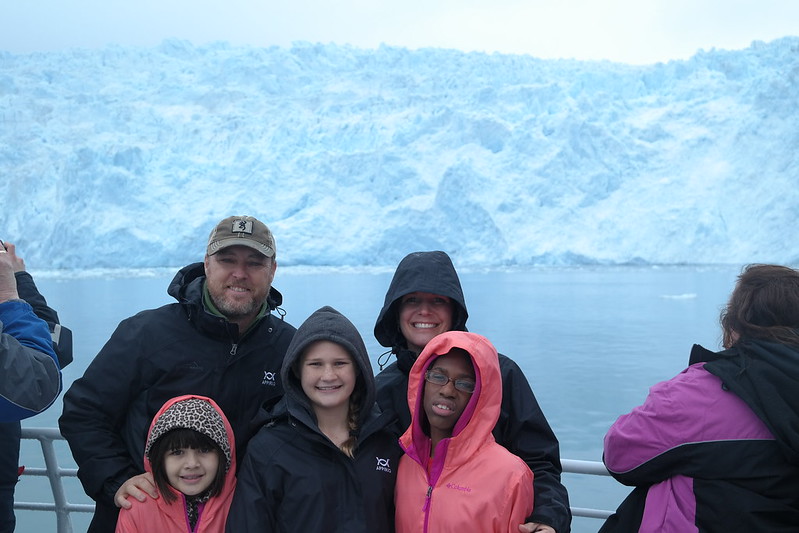 We knew the awesome weather in Alaska wouldn't last forever. It was cloudy and rainy for most of our stay in Seward but we didn't let that get us down.